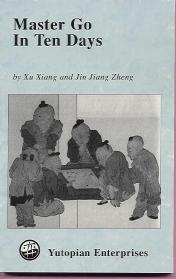 Though it starts with the rules, the material is more advanced than in most introductory books. For example, the under-the-stones tesuji is covered in the second chapter, and the last chapter has some pro game commentaries. The commentaries are at a level more basic than in Appreciating Famous Games. This fast pace makes it similar to The Second Book of Go in feel. Of course, not everything can be covered in such a small book, but some of the omissions are strange considering some of the more advanced material presented. There is no discussion of handicap Go. Although there is a simple example of seki in the section on counting the score, there are no examples of seki in the Life and Death section! The Attack and Defense chapter consists entirely of various examples of invading various extensions in the fuseki; there are no leaning attacks, no running fights, no reduction examples, and nothing on thickness. But it covers the 4-2 point probe under a shimari, which is usually left to more advanced books. (The coverage is incomplete, which is somewhat dangerous for this.) I like that there is a chapter on sacrifice tactics, because I think it's a good idea to introduce that idea early.

This is one of those beginner books where the beginner is instructed to ignore anything he doesn't understand and then come back to it later after playing more. This allows both basic and advanced topics to be covered in the same book, making the book last longer. I think this style is okay, and to the authors' credit they do state this intent in the introduction; however, this format may discourage some players, who would prefer to be able to pick a book at the right level and read the whole thing. I still think The Second Book of Go has the best introductory coverage of the game in one book, and would definitely recommend it over Master Go in Ten Days.