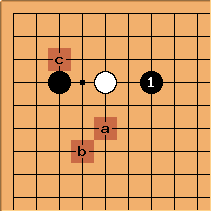 This pincer (sometimes called "Magic Dirk") is undoubtedly severe, but joseki for it have taken a long time to develop (it has been adopted much more slowly than the Magic Sword).[4] For a time it was principally associated with Otake Hideo: that was back in the 1970s. There has been some recent research giving new joseki.

This joseki receives only two pages, comprising a total of seven diagrams, in Ishida's Dictionary of Basic Joseki. It is not covered in Essential Joseki, Jungsuk in Our Time, Whole Board Thinking in Joseki or 38 Basic Joseki.

For many years it was assumed that a here is the only reply. Some games in which White tries b instead have been seen since 2001. If running is bad for white because black has a stone in the way further down the board that white would run into, it's also possible for white to attach immediately at c.

Some whole-board strategies might involve extra considerations. For example, this is one of the pincer if white approaches this way when black has set up a Kobayashi opening.[5] 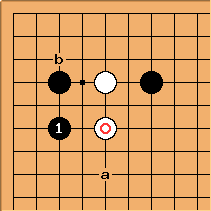 Black is expected to play

here. NB that trying to connect under isn't good for Black.[6] Now White a and b are seen. 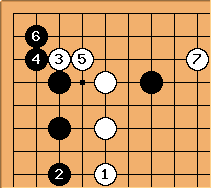 This is one standard continuation, which leads to a running fight on the upper side. White must of course attack, having given Black territory. 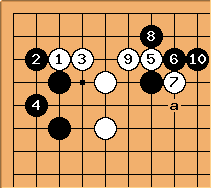 This is a current idea, with White playing for immediate life; White 11 at a completes a joseki.

Alex Weldon: What is the point of

here? Clearly, it's to defend against some White move that would hurt Black, or make things too easy to White, but I don't see it. Someone clarify for me?

Sorin Gherman: Alex, the purpose of

) and to make eye shape for black's group in the corner. 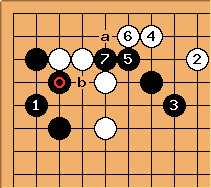 Dave The direct meaning of

here is shown by comparing this diagram and the next one. Here if White tries to connect underneath, the marked stone is strong because

protects it. Black gets either a or b. 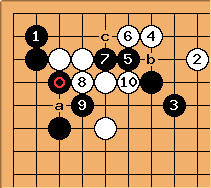 Dave In this case the marked stone is weak. If Black does not protect it, White gets to play at a. Even if Black plays

, White can answer at

. Black has no choice but to retreat to b so White can connect under at c. 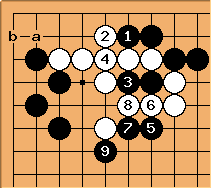 Dave Although it seems that White settles her stones in this joseki, there is some bad aji remaining.

here is a big move. If White plays the seemingly natural reply at

, Black proceeds to wall off the left side with

. At the end of this sequence White still has only one eye. Since

does not work well, White may only exchange a for b and turn away. She then has to answer a Black play at 2 but the a / b exchange means that Black can not connect underneath. 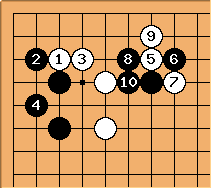 How should W respond to this

? I descended and got cut into two groups, one of which was hunted down and eventually killed. Is 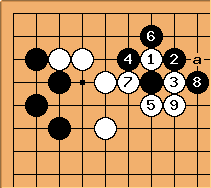 Dave To my eye playing

here instead of descending at 6 looks natural. If Black plays

and W answers at

, White has settled herself and there is a cutting point left behind at a that may help White in reducing the top. 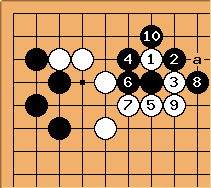 then White simply continues with

but in any case has to go back to capture. there is still a cutting point at a and Black has ended in gote here. 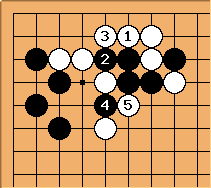 Dave But maybe we are being too easy-going. What happens if White just fights it out with 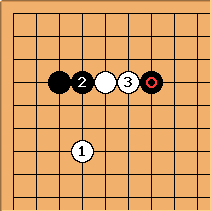 These plays are currently being experimented with:

, and then White can try another butting play at

White 1 is used to get a position on the top, typically to counter the effect of a shimari or formations that wants extention on the top. Black 10 at 'a' and the white makes an extention at 'b'. In the second game below, black actually plays 10 at 'c', but 'a' is more common. 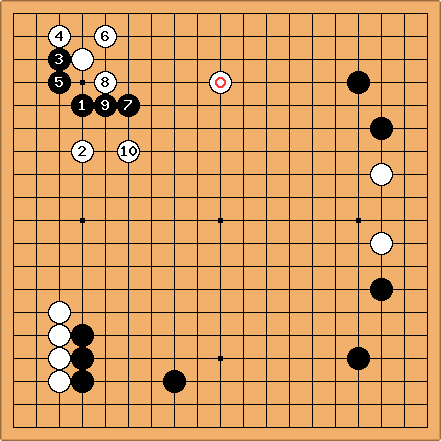 is usual) but this variation is usually played when there is an opponent's stone in the running path, such as

or some other reason why a running fight is bad. I wonder whether amateurs can just play this regardless of

to avoid the running fight. Calvin

[4] A dirk is a long straight-bladed dagger. Hence the facetious name.

[5] This pincer is quite strong in the Kobayashi Fuseki (opinions differ on whether pincer with this or a two-space pincer). The sequence in the diagram below is good for Black as a simple nozoki 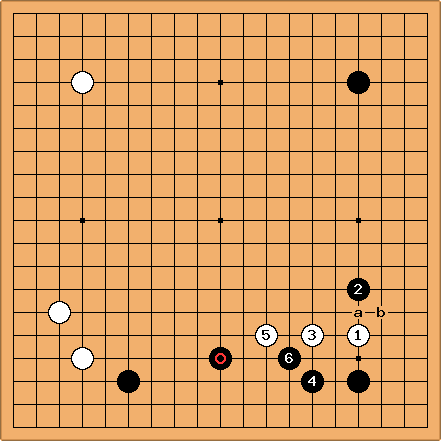 That's why White usually plays a or b instead of

DJ: Now the database experts will tell you how often this sequence (or a, or b) has actually been played. I've played this with black a lot gaining quite an advantage in the fuseki, that then proceeded to waste in the chuban as is my style...

[6] Charles - you state above that connecting underneath is bad for Black. As a novice, the connection underneath would quite possibly be my preferred move here.

What are the considerations that make this a poor move relative to the others? It seems to me that 1 would support

if white had a stone positioned near the hoshi point to the right. 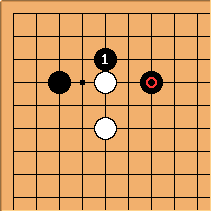 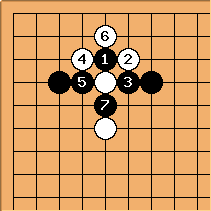 Charles I had this played against me once, ages ago. After

White connects the ponnuki, for superior shape. That is,

is a failure; if

is at 4 and White connects at 3 this is like the Bermuda triangle.

It was 25 years ago, and my opponent David Mitchell had been reading a Japanese joseki dictionary in which this diagram occurred. After the game he went back and translated the comment, 'bad for Black'. What's more he told me this, which is more than some players would do. Those were naive, unspoiled days.

Yep, that makes sense now. Thanks for showing me - Phlegmatic Bob McGuigan: After White connects the ponnuki, as in the following diagram, 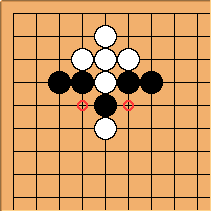 the two marked points are cutting points in Black's shape and only one can be defended on the next move.