Bob McGuigan: There hasn't been much discussion about positions on SL lately, so I thought the old question of which side to block on after a 3-3 point invasion might be worth revisiting. Here is the beginning of the second game of the 1997 Tianyuan match, played in Shanghai on March 5, 1997, between Ma Xiaochun, White, the titleholder, and Chang Hao, Black, the challenger. 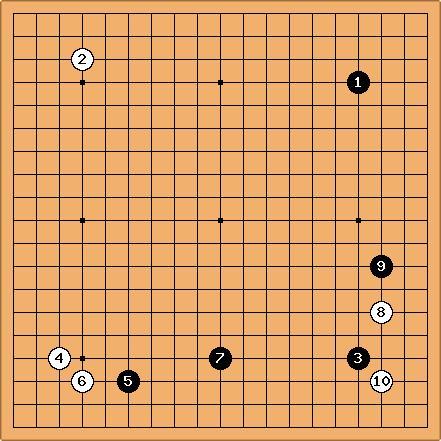 Ma has just invaded at the 3-3 point. Now, how should Black (Chang) block? The following diagram shows the next five moves. 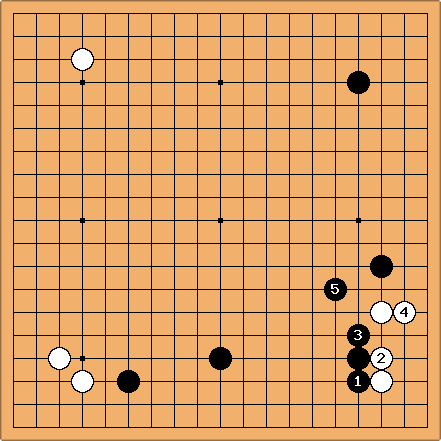 This all looks straightforward enough. However, Go Seigen, in a commentary, said that Black should have played as in the next diagram: 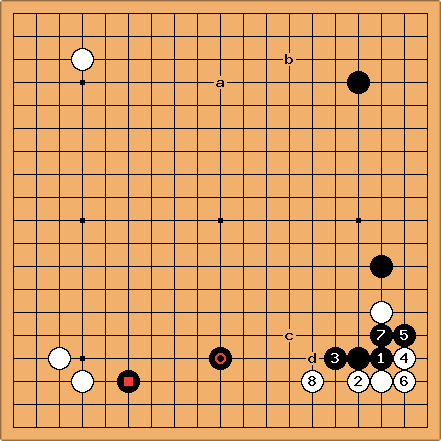 What do people think? One question in my mind is whether Black's two stones on the lower side have lost effectiveness. Also, just how has the situation on the right side changed? The commentary is from the book Go Seigen Saishin Uchigo Kenkyu published in 2005 by Seibundo Shinkosha.

Alex: Hmm. You're a bit stronger than me, so I don't know if I can offer any insight that you haven't already thought of yourself, but no one else seems to be kicking off a discussion, so I guess I'd better do it.

I probably would have blocked the way Chang did. I think most amateurs would. We would look as far as the circle-marked Black stone, say "that's the side with an extension, so I'll block that way," and that would be it.

However, I think I might see why Go Seigen recommends blocking the other way. Since there's nothing on the right side except the pincer, it must be the corners that he's thinking about. White has played very solidly in the lower left corner, so if Black builds a moyo on the lower side, White can fight with his hands free. Furthermore, that joseki ends with White sente.

Meanwhile, in the upper right, Black has a hoshi - good for development. He will also end in sente if he blocks that way and can play around a or b. The open space on the right side is not quite big enough for White to wedge.

John F. I found this a very interesting poser, Bob - thanks! I can't add much. Taking the shape from the square stone rightwards, GoGoD has 109 games and in every single case Black answers the way Chang Hao did. Since Black in these 109 cases included the likes of Yi Ch'ang-ho and Cho Hun-hyeon, I think we can safely conclude that this is in no way a bad move. Furthermore, Black won 55% and White 44%, all games with komi. I'd be tempted to say Go Seigen is mischief making. Some people believed, after we presented his "White 8 is bad" theory in another opening where the figures also disagreed with him, that he had lost his marbles. But other pros instantly stopped playing that White 8, so they must have understood what he was getting at. It will be interesting to see whether they now stop playing Chang Hao's move.

Velobici: "White 8 is bad" theory in another opening which opening ? Arghhh...what a tease! Its like being in high school again !

I haven't got that book,Bob. Can you offer a bit more of Go's commentary, please? I couldn't really see what Black did wrong to lose this game, unless the play in the top right corner was a mistake by Black as opposed to a sacrifice/squeeze tactic.

Bill: I do not pretend to understand Go Seigen's thinking. However, there is one point that I think needs to be emphasized. Blocking on the right side instead of the bottom allows Black to take sente. Just comparing the two diagrams, the one where Black blocks on the bottom is better for Black, but there is a one-move difference.

Bob: Here is what Go thought might happen after blocking as he recommended: 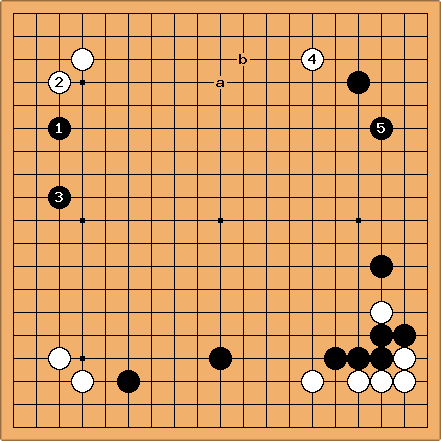 Go says that after the moves through

, White will be perplexed to choose between a or b. The next diagram shows what Go expected after white a. 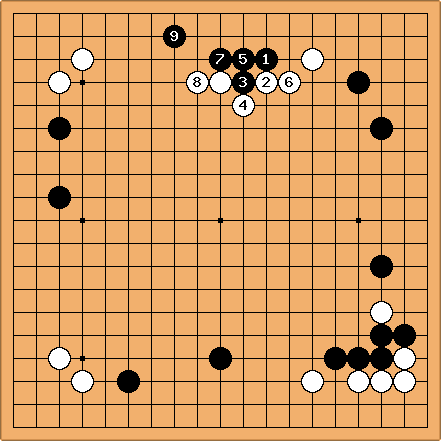 "Black would invade at

without any hesitation and after the moves through

, Black has a definite advantage." 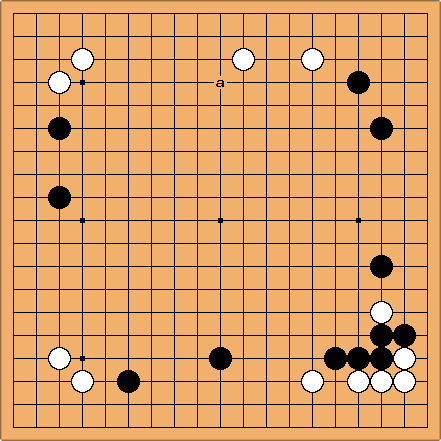 In this position Go felt that with the black shoulder hit at a left for later, this is a liability for White.

Now, John, about the later part of the game. Go finds things to criticize in the play of both players and doesn't pick out any losing moves specifically, but he does label Black's moves 81 and 83 dubious, not appropriate. Because of them Black gets gote after 87.

John F. Thanks, Bob. This is all very typical of Go Seigen's recent style of commentary. I have a strong feeling that he no longer aims his commentaries at amateurs, but directly at professionals. Furthermore, an ever-present but not often expressed theme in his comments is an unusual concern with what I call the sub-centre of the board. Take the centre points of each quadrant and join them up. The area immediately either side of that line (a "ring") is what I mean by sub-centre. The deferrable shoulder hit mentioned above is one aspect of that. I'd guess that he doesn't like White's position in the line with the ogeima extension because, after the invasion, White's position is too messy to offer control of the sub-centre. (Compare a White invasion against Black's ogeima at the bottom - Black's centre-facing stones then seem to work much better).

If you find my interpretation of Go's themes plausible, I'd suggest that the Ma-Chang game bears it out. Despite the awesome looking moyo at the bottom, Black never really got control of the sub-centre on that side of the board. He was always on the back-foot through having to defend his (?over) investment there. In the variation proposed by Go, Black seems to have spread his investments more judiciously, i.e. in line with the Six Harmonies Go loves to talk about now.

Andy: Very similar to this unaccredited game shown by Ikuro Ishigure? in Vol 1 of the Elementary Go Series, In The Beginning under the heading of "efficiency": 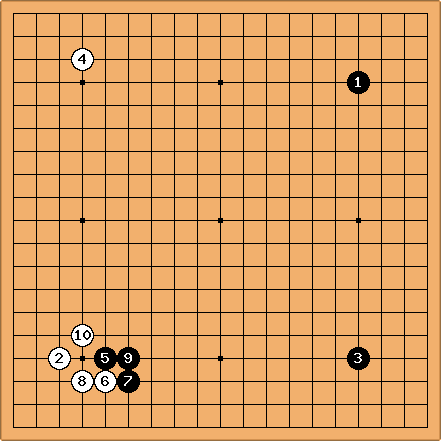 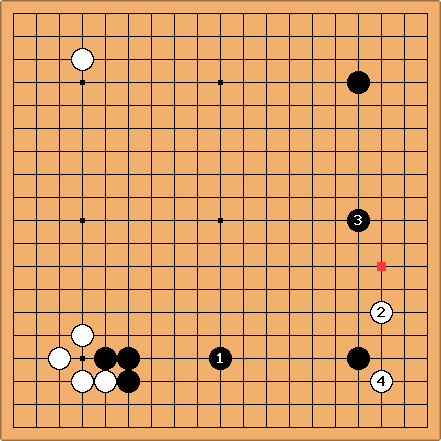 Instead of Chang's move at the squared point, here black does a wider pincer at

and again black has to pick how to block. The game proceeded: 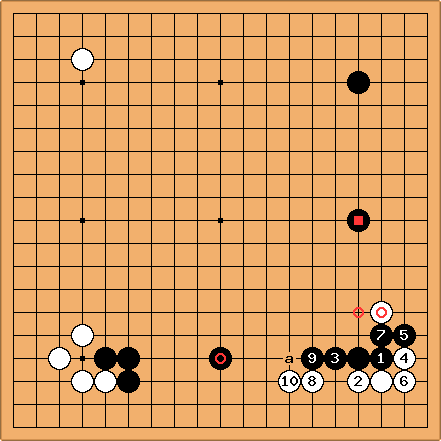 Ba after which these stones "work beautifully with Black

and the two stones farther up the right side to map out a really large area. White cannot get up off the third line on the lower side." The efficiency context was to play

is dead already and needs no further attention. Maybe Chang went wrong by playing too small with the low one-space pincer rather than

Bob: Regarding the close pincer in the lower right in the game, Go Seigen commented that Black should not have pincered at all(!). Instead Black should have played

in response to the approach move

, as in the following diagram: 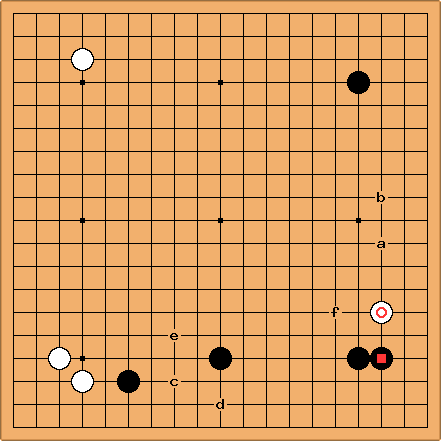 According to Go, one way the game might proceed is given in the following diagram: 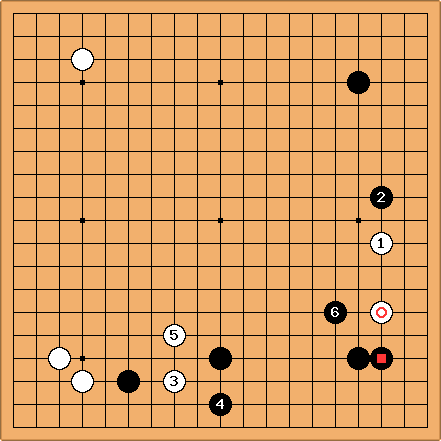 is enjoyable for Black, according to Go.