, I have just realised). Was my response wrong or did I just not follow it up correctly? (probably both but hey :p). Thanks in advance for any input :D. Cya!

actually looks worse in conjunction with

as you are then left with an underpowered extension: see bottom of page for more details. 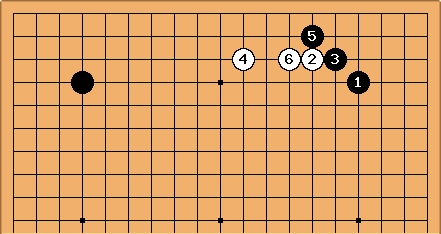 BobMcGuigan: Not a dumb question at all! Your move at

shows the good intention of keeping your stones connected. Actually,

was unusual. In this position

is not so good. The usual answer would be

in the diagram below. Then

would either be at a or b, and then White would extend to c or d on the upper side. This would be a good development for White because the white stones on the upper side would have a stable shape while Black's upper right corner would still be open to invasion. 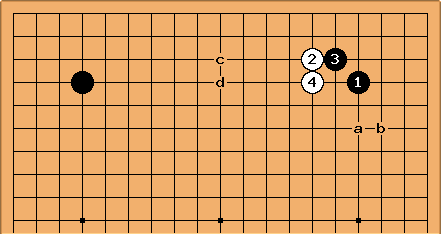 The moves you played made your stones too close together (heavy) without definitely having a base, so they could become a target for attack.

LovedInEmerald Yet again I would like to add a couple of things which I've learned since asking this question (obvious as they may sound :p).

in the first diagram was weak because when the opponent plays tsuke then you must consider that by not responding with a hane or by adding to the initial stone then you lose a move locally (meaning the position becomes as though you had made an unsupported tsuke play).

(in the first diagram) is an unnatural move as

is an inevitable part of that sequence if you want to avoid sacrifice. You would obviously not want to play

as below for two reasons 1) it leaves your position very flat and 2) it would be clumsy even assuming you were allowed to play at one of the marked points (I would say this is a fairly optimistic assumption as well). Clearly a play at a works better with the marked points than one at

(below) as it makes an approach more difficult.

at one of the marked points you would then be unable to play 44 point lowapproach diagonalcontact thenpincer. 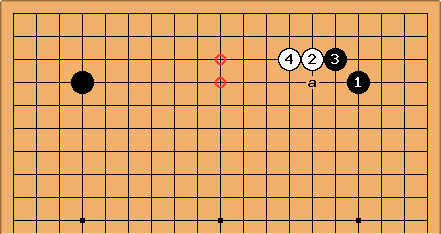