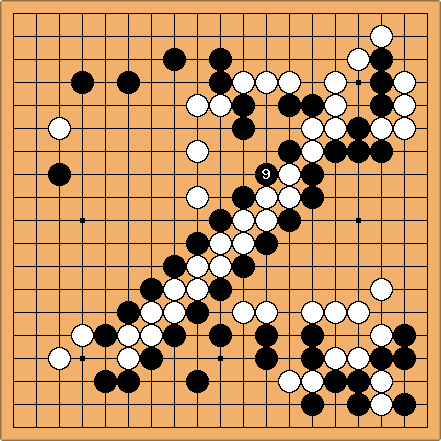 tderz Both players missed the ladder for some time (about 8 moves in the second diagram of the referring page).

The first lucky one to "find" the ladder was Feng, she won the game.
(In addition, White was already at a factual disadvantage before, esp. if the pivotal cutting stones can be captured).

zinger: Eh? Two professionals "overlooked" this ladder? Did they admit this themselves? Perhaps it was a lightning game? It just sounds so ... impossible.

tderz: Bill, it was not a lightning game - and I am pretty sure (= I strongly believe) that profs can and do watch ladders at speed too. I guess it was initially a capital oversight (=blunder) by Jiang (would be a fact if connecting all stones is objectively the biggest&best move).
That then Feng did not immideatley start the ladder is open to interpretations:

I could ask Feng Yun what her feelings were during that game.
Fact is - as every one can verify for him/herself - that the ladder was played only 9 moves later than in the 1st diagram (

) in the referring page.

tderz As everyone can verify for him/herself, the starting move for the ladder (

here) occurs only 9 moves after the

in the first reference diagram.
Professionals are human. Human make errors (Errare humanum est).
For professionals these kind of oversights are capital blunders (poka). It just can happen to everyone. For me, the interesting thing is thus not that it happened to Jiang (human), rather that Feng? did not atari-ed at

in the first diagram to connect the groups.
Looking at the black pofit which already was quite sure, *connecting groups by

is an extremely fascinating & attractive action.

That Black (Feng?) did not play the starting move for that ladder could mean (at least) two things:

This way of thinking might have been an unconscious monologue comprising some fallacies as "Denial of the antecedent" ("A implies B, A is false, therefore B is false." = he would not have played there if there was a ladder -> (he still played there) THUS there is no ladder) with an implied appeal to authority (he is a professional too).

There might be many more options, but I tend to believe more that it was (1).
There is a (famous) Kato Masao _ Rin Kaiho game (Go World, 25 years ago) which gives insights in games where a blunder of an opponent is used in a subtle way (and not just listening to "maita des'ne" or so; both are Chinese, hence: "wo cuole", "wo shule" or so ), where one of them (Kato?) realizes that the other hallucinated in chasing a group which he thought of being killable, and he happily exploited that thought by marching on and in other areas.

zinger: Interesting analysis, Thomas. It isn't at all clear what happened. (1) is an interesting suggestion - aren't we all cautioned from an early stage not to play moves assuming an incorrect response? And yet, we also hear that professionals do not re-read anything - they read it once, then rely on their conclusion. Perhaps Feng was taking advantage of this mode of thinking. If only she would tell us!

Out of curiosity, how many moves of the ladder were played out (if any) before white resigned?

tderz None was played out. After Black played

, white fought furiously all over the board, but could not make up this strategic loss.
Correction! Two more moves were played in the ladder! 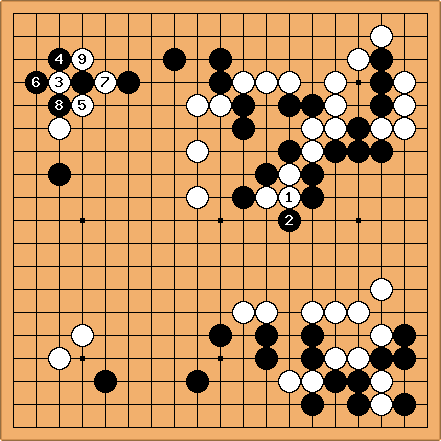 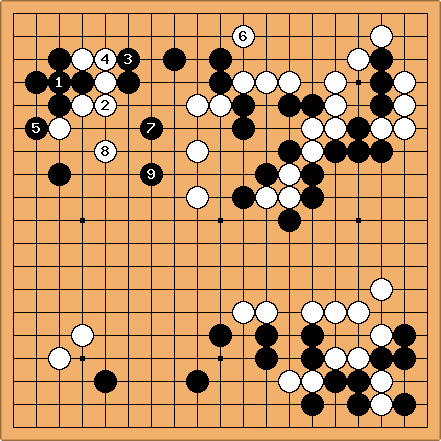 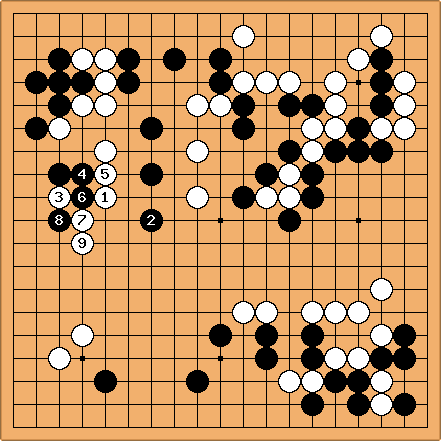 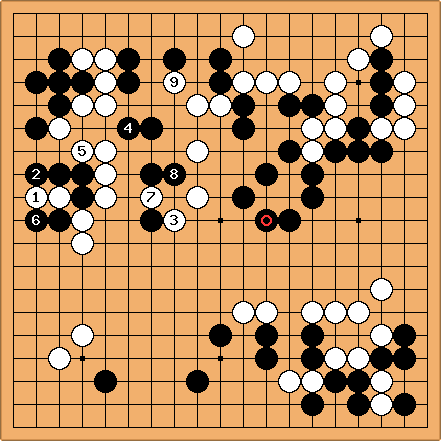 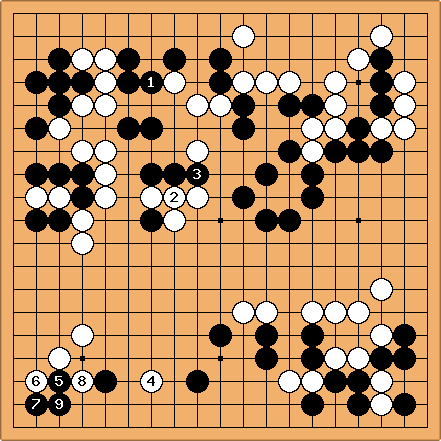 etc. etc. The game SGF was an AGA attachment. 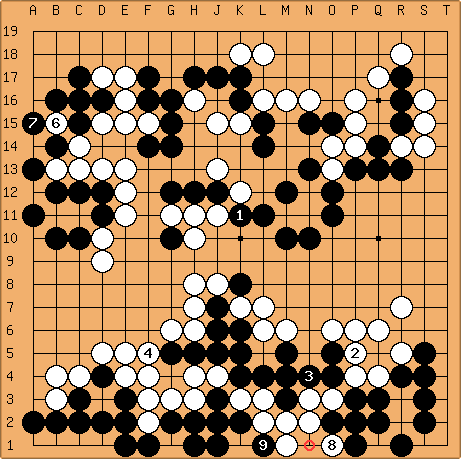 )
after White resigned after 203 moves