Kageyama Toshiro states emphatically in Lessons in the Fundamentals of Go 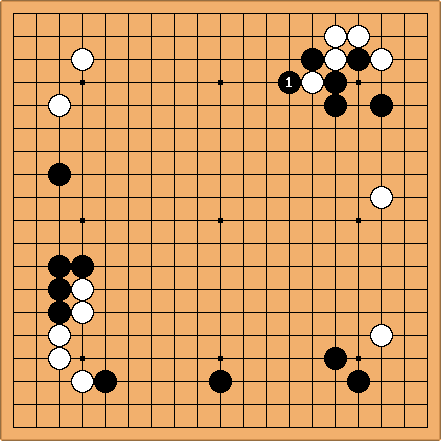 . Many amateurs, sometimes even dan-ranked players, are apt to become impatient when confronted with long ladders like this and resort to stooping down and sighting diagonally or running their fingers zig-zag across the board, or in extreme cases to arguing their opponents into submission verbally. All this I find a bit silly.

When a ladder becomes slightly difficult to read like this, there is a widespread tendency to give up, and wonder if there is not something like a triangle theorem, some mechanism one can apply to get the answer instantly. If you want to create such a thing it is not too much trouble to do so, but having it will only prove destructive to your game. Ladders are the school that teaches you to read patiently, move by move, -- black, white, black, white, black, white -- which is the only way.

... Confine your practice to this one exercise every day until you can read the long-distance ladder in Diagram 1 with the greatest ease, right out to its end. When you can do that, rearrange the stones in the lower left corner -- use your ingenuity -- and try reading again. That's the way.

This exercise will earn you a valuable reward: the confidence that you can read any ladder anywhere, anytime. This confidence heralds your next big stride.

Note: This rest of this page contains ideas that are slightly controversial. Some people [1] believe that these may be injurious to your go playing abilities.

Workaround 1 for ladder-breakers - Arrows and trigonometry 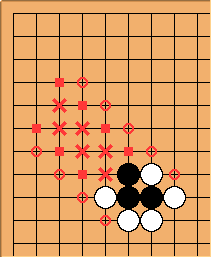 It is useful to note that the width of a ladder is four stones (horizontally or vertically). Because any opponent stone at the adjacent

points will also break the ladder, the region of the board that affects the ladder is actually six points wide. If there aren't any opponent stones in that area, a ladder works. 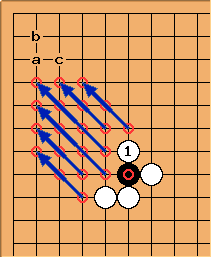 A simple technique for reading a ladder is to see six diagonal lines from the start of the ladder. Except for a, b and c, any black stone (only) on the marked points will make a ladder-breaker.

However, if there are both black and white stones on the marked points, please read the ladder 'manually': visualise it on the board. That's not so hard, either. 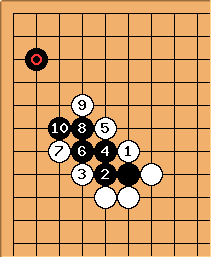 Why is a black stone at a in the previous diagram (the marked stone here) not a ladder-breaker?

This diagram shows why - on the second line, White can play at

instead of d in the diagram, rendering the

The reader might want to figure out why having a black stone at b or c in that diagram doesn't make a ladder-breaker.

Besides, note that the ladder-breaker points marked don't include the points on the first line. Go and figure which of these points make ladder-breakers, and which do not.

Workaround 2 for reading ladders - Reading the zigzag only

uxs: I agree. Being able to read them out is more useful than this "simple" technique, which apparently doesn't even work when there are just a few stones in the way. On the other hand, reading them out can be hard, especially if you try to read them as "black, white, black, white, ..." You just tend to lose track after a while.

I have found that the following works rather well: instead of reading out all stones, just read the inside stones, until you come across possible ladder breakers. In other words, if it's black chasing white stones, read the white ones. This is very easy, since it's just a simple zig-zagging across the board. Then as you come across the possible breaker stones, add (in this example) the black stones. This is also easy, as you just have to add one in the direction where you read the last white stone. 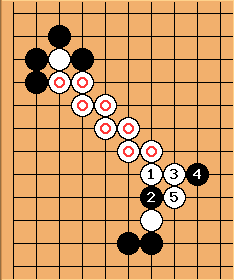 In the example, the initial situation is all the unmarked stones. When you start reading, you only read out the (marked) white stones. When you then come across the possible ladder breaker, you also read the black ones. You can stop reading when you see that

, since it touches the white stone below it and will therefore surely be put into atari. But it's safer to actually read it completely, and not that much more difficult.)

QWerner: I think using the correct reading technique for ladders is important, because these are reading examples which can go thought the whole board. If you are in timepresure and you start to read the whole ladder out its easy to miss a line. Even by reading only the zig-zag´.

I do it the following way: 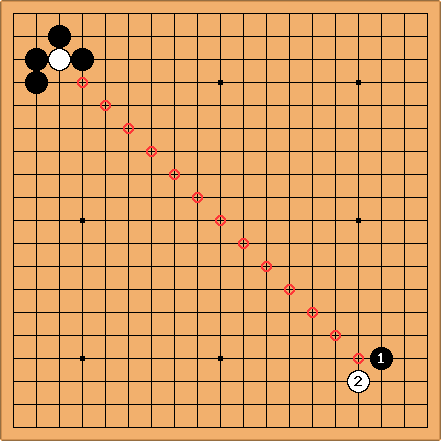 The first B stone will be right from the last red circle and the next W stone is then under the red circle, because the first two W stones are vertical.

ColdNightHere is a trick I figured out myself. You might find this useful when choosing Joseki: Insted of reading all the way to the corner

Simply move the stone in youre head to its place next to the Tengen for cuting the reading in half. 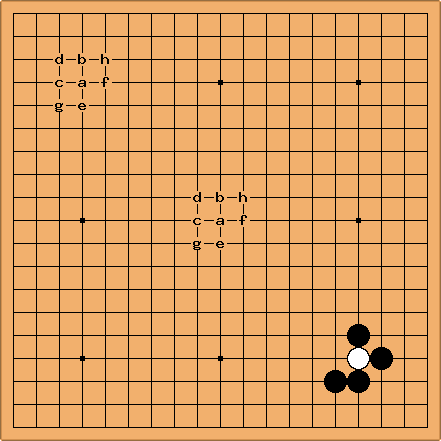 Tapir: Imo, this is the only shortcut which is not self-defeating / self-cheating. However, how long do you need to read a ladder out to tengen and to the other side of the board. I may need a similar time to move the stones in my head. Though a shortcut for blitz games may well be helpful. 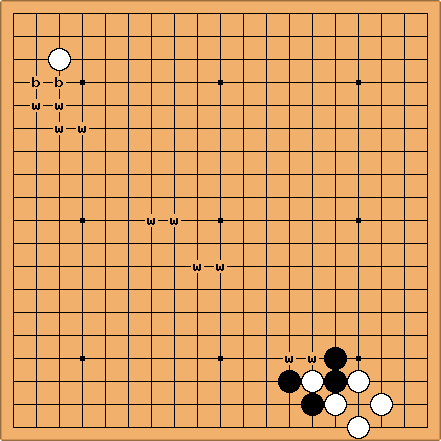 Timm: I feel like reading the zigzag throughout the board is fastidious and error-prone. Instead, in such a case, I'd just note that White starts moving to the left on the second point from the hoshi and jump to the end of the ladder.

This works well in the most simple cases. Then if at first glance it seems it won't be trivial to use the hoshis, I'd just expand the zigzag and read the last moves.

Originally started as comment to Workaround 2, but of general interest.

Klaus: In my humble opinion, all these tricks are going the wrong way. Just Read the ladder!!

uxs: If you're saying that the way I read them is a trick, I have to disagree. You ARE reading them out, but only the relevant parts.

Klaus: So the trick is leaving out the irrelevant parts? I guess it is a matter of patience to read out all moves, one by one. It might not seem to be necessary, but it is the right spirit. (Yes this is the part of eastern philosophy which western people have most problems with, and well, I might be off the mark, who knows?)

kevinwm: Hey man - don't make it a big black and white thing! That's really messing with the Tao. You can pay closer attention to some of the stones, but don't completely forget the other ones either. In case the ladder comes back and intersects with itself later... can you read this? 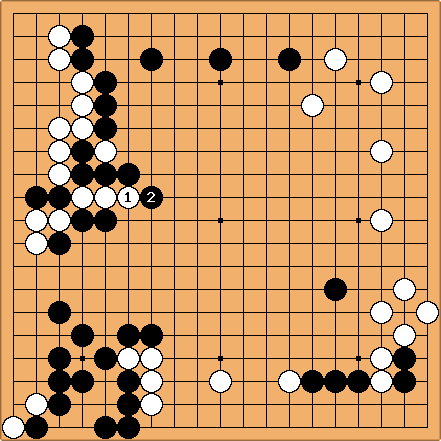 Bob McGuigan: uxs mentioned a tendency to lose one's place when reading out long ladders move by move. That prompted me to think that that is exactly why one should read them out that way. The larger goal is not to determine whether the ladder works but to strengthen the ability to concentrate and read, ladders being a relatively simple training ground.

Not really a trick, I think that uxs does well by saving time... Anybody who sees the zig zag can see it wrapped. Just as long as you're careful and don't get confused... And ladders aren't the easiest way to practice reading - They can be hard (/confusing) for stronger players as well... Reuven

Kageyama recommends reading ladders all the way across the board every day till it becomes easy. Then throw a few stones in the way and do it again, daily, till it becomes easy. I would add, repeat till the ladder problems in The Treasure Chest Enigma become easy. Any else is shortcutting your own ability to read and to visualize. See Lessons In the Fundamentals of Go Just last night at go club, a person(4k) that used to beat me reguarly played into a ladder that i had already read out. THEN started to read the ladder which extended three-quarters of the way across the board. One could see his head nodding move by move...in shock I exclaimed "now you start reading the ladder!" This is not the first time this has happened this year. Beat a different 4k the same way several months ago. Note to self: Read ladders till they are so easy, you dont hesitate to do so. Ever. Velobici

Reuven: Hmmm I really don't understand the difference - It's not a shortcut! the zigzags aura (:) is as obvious as an elementary problem would be to you. You don't really read it, it's just there - You only pay attention to the zig zag itself until anything else is called for if you can...[2]

Hmmm. Even in the 'obvious' example above, in a more realistic position (more surrounding stones - I am not very good at creating problems, I am sure others can think of better examples), it is not at all clear whether white can escape or not. Note that many stones may seem irrelevant until you read it out - all the way. I am not saying that shortcuts cannot save you time in some cases, but that you need to be very careful about when you apply shortcuts (tricks/cheats :^) and when you do not. (''Example and discussion of the example moved to /Example)

No shortcuts - but how to read then?

Tapir: While I don't use any shortcut I like to share an experience I made. I used to read "If Black plays here, White plays here, Black plays here etc." that is I verbalized while reading. I read slow and unprecise then. Now I try to visualize. Since visualizing isn't so easy over the whole board I now try to visualize with rhythm - that is "Atari, extend", "Atari, extend" - without thinking the words or verbalizing of course. I admit the ladder here is still somewhat difficult to read - i lost track several times :) - but even that one is readable.

[2] Once again, if you can avoid the confusion - I used to get confused when the ladders got messy and would switch to per-move... It's the same thing only it's slightly more time consuming as you save some time by landing both the inner ladder stone and the pressing one when u'r only reading the zig-zag...