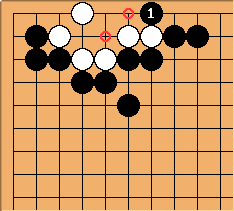 AndyPierce: There is death in the hane for black, making miai of the

points for a kill. 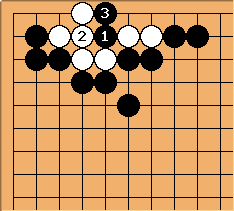 RiffRaff: I think this would also work.

is death in gote. 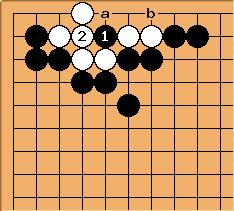 tenuki leaves a and b as miai for the kill.

For that matter, I think that any other

is also death in gote :

seems to kill without leaving any ko threats.
erislover If black plays tenuki because of miai for the kill, then a and b do threaten to live so white will get a ko threat.

Alex: Right, but the point is that

is not, itself a ko threat, nor is any other

leaves no ko threats. White is not going to play

and die in gote just to create one ko threat for later. ;-) 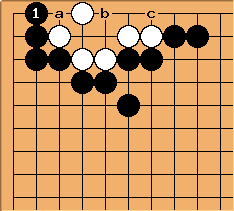 erislover - Almost anything seems to kill. White has no response here, either. a is met by b, b is met by c, ...

zinger: I like this way best - killing from the outside. Later, if this group comes back to life due to a ko elsewhere,

will still be a good move.

Tas: But if the killing move leaves no ko threats there are no way a ko elsewhere wil make it come back to life... 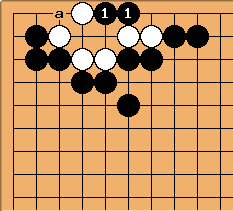 Xanthus: Just to be complete, these two

's also seem to kill. This gives a nice total of five possibilities!

zinger: And beyond that, there is the absurd-looking move at a, which technically also kills, but is obviously worse. 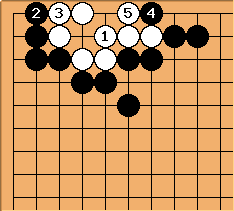 RiffRaff: With white to play, life looks pretty easy. So overall status would be unsettled.

Tas: Shouldnt this be moved to the solution page?