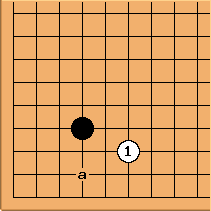 creates an opposition of stones, forming a shape called keima. The position can be called opposing keima? or knight's check. If it occurs in the corner, like here, it is called a small knight approach (of the corner).

Bill: Dieter, I have questions about calling this an opposing anything, because of the use of opposing in such phrases as opposing 3-4 points and opposing corner. My first thought when I hear the phrase, opposing keima is some formation in opposing corners. The use of check is interesting, but it brings up chess images. ;) Still, I see the problem with specifying that the stones are of opposing players. Counter keima comes to mind, but that seems strange, too. Ah! What about checking keima? Or knight's parry? Parry brings up fencing images, but they are appropriate. :)

Dieter: Bill, indeed, it is not about two keimas opposing each other. The chess imagery is less disturbing to me. Keima check has my preference. Checking keima is also ok. Knight's parry seems like a good alias.

Andy Pierce: why not just call it 'keima approach'?

Bill: Because keima approach (without qualification) already refers to a corner approach. 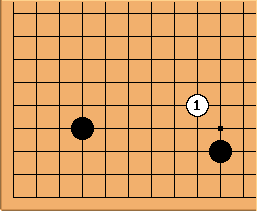 The idea, IIUC, is to have a general term that would include

in this diagram, which you would not call a keima approach.

Andy Pierce: John Power translating Shuko in Reducing Territorial Frameworks calls (B:) "The Knight's Move". I dislike "Knight" anything, because the term has no meaning without knowledge of chess, so I'd prefer a term containing keima. For the corner approach in (A:) specifically, 'keima kakari' seems appropriate enough. I wouldn't object to just using 'keima approach' for the general (anywhere on the board) concept like (B:).

Dave: Andy, since keima has no meaning without knowledge of the chess variant shogi, I don't really understand your objection. :-) In any case this page seems to define a redundant term. "Opposing keima" would only have meaning when we attempted to clarify verbally that the "keima" shape was in relation to one of our opponent's stones. How often is this additional clarification necessary? It will never be necessary when we are writing about a diagram, for example, since we can see the color of the two stones involved. If it IS necessary, what is the proposed alternative term that we will use to describe the case where the keima shape is in relation to one of our own stones?

Dieter: Hi Dave. The notion of opposing keima? first occurred in Minue's writings about Haengma, see Haengma tutorial for beginners. The term was specified in order to bring the fundamental relationship between keima and kosumi, to surface. If context says it all, there is no reason either to differentiate between a kosumi and an angle play, or a shoulder hit. Same for a one space jump and a capping play. Indeed, for playing Go or even analyzing, you need remarkably few words. For setting up a theoretical framework however, you need a lot of words. You can doubt the usefulness of such a framework, but that's a matter of viewpoint and taste. Cheers.

For the alternative term, keima does fine, since the chess analogy already provides the idea of sameness.

MrTenuki: But isn't Case B also a knight's move cap?

Bill: As far as I can tell, knight's move cap was coined by Charles Matthews, and does not appear in the go literature.