Following is my research on Development Of Go

He achieved 1-dan in 1917, and like his teacher rose swiftly through the ranks, eventually reaching 9-dan in 1967

In 1933, along with Kitani Minoru 6 dan (at the time), he developed the "New Fuseki" (Shin-fuseki). The same year he won the Nihon Kiin Championship and a special game with Honinbo Shusai Meijin was arranged. His play in that game was the cause of controversy when he played his first three moves on the 3-3 point, a star point in the opposite corner, and the central star point (tengen). (Jan van der Steen)

Starting in 1939, he played a Jubango (ten game match) with Kitani Minoru, beating him down a rank by winning the match 6 wins to 4 losses. This was the start of a brilliant match career in which he defeated all the top players in Japan successively: Karigane Junichi 8 dan, in 1942; Hashimoto Utaro 8 dan in 1946; Honinbo Iwamoto Kaoru 8 dan in 1948; Fujisawa Kuranosuke (later called Hosai) twice, in 1951 and 1953; Sakata Eio 8 dan in 1954 (although Sakata had defeated Go in a six game match earlier, the only player to have defeated Go in match play); and Honinbo Takagawa Kaku 8 dan in 1955 (at one point Go had a record of eleven straight victories against Takagawa in match play). Only major titles were 1st & 3rd Japan Strongest Titles in 1958 and 1961 respectively, but was always considered a player of the very highest caliber. Won the Oteai 6 times. (Jan van der Steen)

Crowning achievement of his career was his defeat of Rin Kaiho in 1968 to capture the 7th Meijin Title.

Takagawa was noted for his skill in the opening, calm and elegant style, and was viewed as just a notch below Go Seigen and Sakata Eio as one of the greatest players of all time. (Jan van der Steen)

Considered the father of Korean professional go. He was born on 30 November 1923, and in 1937 become a pupil of Kitani Minoru in Japan.

He returned to Korea in 1943 and in 1945 founded the Hansung Kiwon, the predecessor of the modern Hankuk Kiwon (Korean Go Association).

For a long time he was the strongest player in Korea, winning the Kuksu title nine times in a row (1956-1964).

He is the uncle of Cho Chikun and Cho Shoen. 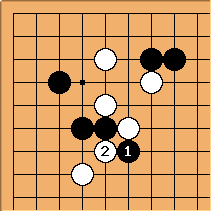 in the 1971 Meijin Title: Fujisawa Shuko vs. Rin Kaiho.

Born in Shanghai, China. Holds the title of Honorary Tengen for winning the Tengen title 5 years in succession.

Rin Kaiho, or Lin Haifeng (林海峰) as he is called in Chinese, was first brought to Japan in 1952 by his famous compatriot Go Seigen, or Wu Qing Yuan (呉清源). He has won a long list of titles, among which the Meijin, Honinbo, Judan, Tengen, Oza, Gosei and the international Fujitsu Cup. He is one of the few to have won 1200 professional games.

Pupils include Cho U

known for his attacking play

one of the Three Crows of the Kitani dojo

There are many classic examples of Kato killing large groups. One of my favorites took place on March 11&12, 1970 during the 25 Honinbo League. Kato (black) played Takagawa Shukaku and forced him to resign in 93 moves! Kato's awesome power is frightening in this game (eg. Black 67). The

game can be found on Gobase, but be warned, it is not for the faint of heart :)

YY?: Cho's style has been known as "soft wind (breeze) and quick spear," It is somewhat comparable to Muhammad Ali's self-description of "float like a butterfly, sting like a bee."

Lee Changho, Born July 29, 1975 in Korea. In 1991, captured Wangwi, Myeongin, Daewang, Top Position, Baccus Cup and Jaewang Titles. In 1992 and 1993 captured the Tongyang Securities Cup Title. In 1993 he was titleholder of 12 titles, including the Kiseong Title. Lives in Korea.(Jan van der Steen)