The following position occurred in a game between 1D and a 4kyu on KGS. Time limits were 1minute, and 25 stones in 2 minutes. That leaves about 4 seconds per move. Netlag can determine the winner under those conditions. 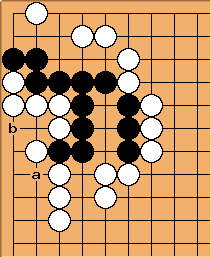 The position was never resolved. Black did not find the obvious move. Black won on time in the end. 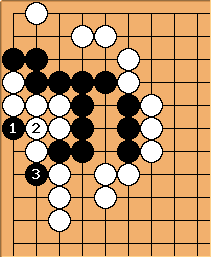 So, correct me if I am wrong, but the position is resolved already within about 15 points gote; black lives with white to move. So, it might have indeed been better to tenuki, depending on the center game and so forth. Or, at least, it might have been feasible; away from the essentially settled corner may have well been where the real strategic potential was.

This seems to be to be an argument for playing more speed go rather than an argument as to why speed go is bad.

I routinely play speed go at 20 moves in 2 minutes (similar conditions to this game) and would spot the correct move in this example in the blink of an eye. Practice with speed go will do that - a lot of things you will see and not have to read.

People with strong views against speed go are usually the player type depending on slow, but accurate, reading. A lot of the things they read out can be seen with practice. Speed go is that practice.

And no, speed go is not a replacement for slower paced games, and no - winning or losing in speed go does not matter. It is practice and it is fun.

Coconuts: I recently started playing many blitz games on KGS, and pretty quickly my short term reading and positional judgment started to improve. Becoming reliant on your opponent's mistakes or time restraints just to win games could create bad habits, but generally if my opponent is running out of time I give him an extra minute (I play 10 second byo-yomi), essentially refilling the byo-yomi clock. I play unranked games so I'm not caught up in winning or losing, and its been very good for my game.

The key to blitz is not to see it as a way to win games, but a way to improve your other slower games.

Yes blitz does allow you to practice fast reading... But super blitz? How far can you push it? When I used to play really fast games I wasted ko threats to gain precious time... This and the game itself already being below the avg level... Here's a question - Won't playing worse games than usual hurt your game? (Well since nobody said anything against..;)

Another note - That diagram is an exception, normally 10k+ in super blitz would see it without trouble since it's such a common shape, it's the less common stuff and such that might a problem... And even though it helped my readin (I assume it's one of the reasons), slow and reviewed games were what improved my understanding (thx K). Reuven

Coconuts: If the game is going so fast that you cannot possibly read common situations, then you are playing above your speed level, and not improving. However, if the pace is such that you are pressured to read quickly (or abandon reading for intuition), win or lose you will get better. I think around 10 seconds a move is appropriate, though you can get away with more stones in a Candian system because often only one move in a sequence requires reading. Like I said above play *FREE* games! Don't be held down by the thought of winning or losing. If you are short on time, ask for more, if your opponent is, give more. Don't base your ranking on blitz; use it to improve your skill.

Didn't mean hurting your rank but your game... (Perhaps by delaying your progress) Reuven

Exir: Reuven, what Coconut means is that if you play ranked speed games, you will be too caught up in winning and would therefore play inferior moves just to win on time. That would hurt your game

Peterius: I'm always busy with work and such and I find that I almost always play speed games with 10 minutes each player and 3 1 minute "byo-yomi" periods on KGS. I'm not sure if this is good or bad for me. If I don't worry about it, I can play every move in less than a second in a way that is decent for my level (22k). But if I worry about it or I'm close to the time limit, I can barely pass in time.

I also occasionally play a game against gnugo for like a whole day, making an occasional move between work. Comparing the two, ultra fast, and ultra slow games, I find that both are good. Its nice to just move without consciously thinking about the move too much. Just to click somewhere and see what happens. Sometimes you do immediately realize it was horrible, but one gets better at that. But its also nice to just stare at one position until you really think you have the best possible move and have thought out what your opponent will do. So, IMHO, both speed and slow go are important for one's development. Speed go also helps one to emotionally distance oneself from the result of the game sometimes.

George Caplan Thank you for your comments Peterius, but I feel compelled to point something out. 10 minutes per player with 1 minute byo yomi periods is not fast, it certainly not ultra fast. Even a short 200 move game could take over 200 minutes, or over three hours at that pace.

10 minute sudden death games can be fun, 25 moves in 5, 4 and 3 can be fun - but faster than that I do not believe accomplishes much. And it is highly questionable to rate 25 moves in 2 minutes games, or 10 second or less byo yomi games in the same system as slower games.

Theoretically, some blitz and some slow games might give you the best of both worlds. But unless you are a really slow player who needs to speed up, I think this combo will tend to simply make you play too fast and more carelessly

damien: Here is a recent chat log I saved after a game on KGS, Masscre(8d) vs. kghin(7d). Masscre played white.

Think movement(Dead link) for a certain point of view.