Invasion as a Ko Threat

This page is in need of attention.
Reason: The ideas and examples on this page are not convincing

An invasion of your opponents moyo is a very large ko threat. If you can place a stone in your opponents territory that could live if unanswered, the value of the threat will be at least 17 points, and usually will be more.

However, the true value of the invasion ko threat might not be in the invasion living, but what it yields even when dead. Big dead groups usually contain several ko threats to live. Gaining four or five ko threats during a ko fight is not a small gain. 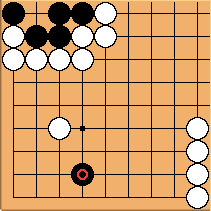 Here White should be able to kill the invading black stone, but the initial ko threat is worth about twenty points, and should therefore probably not be ignored. This particular invasion dies easily if contested, but if uncontested tends to live. 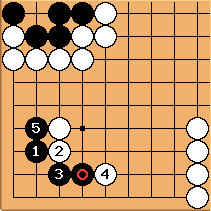 Since the invasion will die with one stone, but live if two stones are permitted in sequence, the ko threat real and worth the size of the corner territory being taken away. 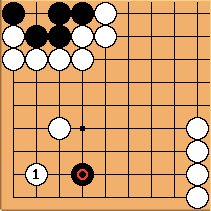 While the invasion has been answered, it still has more ko threats to live, so the process repeats itself. 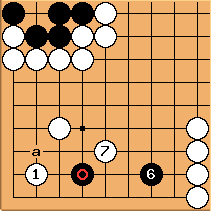 are played in the ko battle, and

makes a ko threat here which is answered with

. Blacks next ko threat is at a, and his invasion will provide several more threats before being unconditionally killed.

An invasion ko threat is an exercise in reading; should black make one too many moves on the invasion and die in gote white can walk away with the ko for nothing. On the other hand, should white err and fill the ko while the invasion can live, the invasion will surely live. 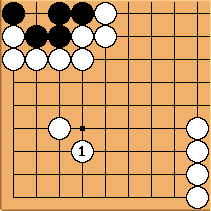 The invasion ko threat is removed by placing enough stones so that one may tenuki after the first invading stone. In other words, the first stone of the invasion dies in gote.