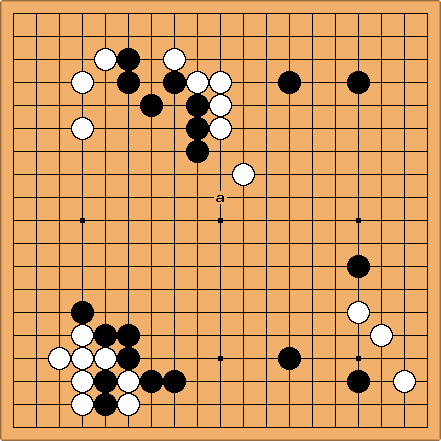 Where does Fujiwara-no-Sai tell Hikaru Shindo he should play, instead of at a, and why? Post your analysis here!

HolIgor: Isn't Hikaru an insei by that time? This makes him about 6d Japanese. Does he still make such mistakes? :(

Seriously though, I don't know what level is this problem but it is far above my understanding of the game. I will try to think about it and come with the best move, but the chances are small.

This is where games are won or lost. In the positions when one of the sides does not have a clue.

Ten days later. I looked in the book, I saw the answer, but unfortunately I can't read Japanese, so I have no choice but to wait for the translation (or learn Japanese, which is faster). The problem is that I am not convinced, I don't really feel that this way the flow of the game will be better. What are your comments, Dave? 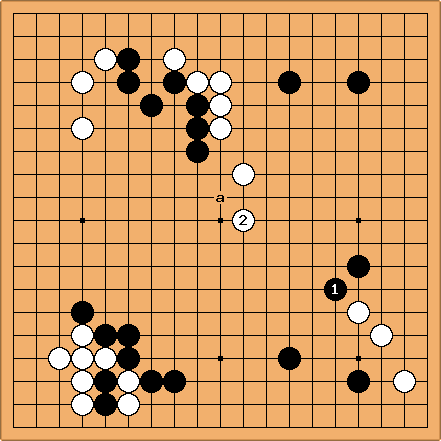 My first idea was enclosing the bottom group, thus cutting the two white groups on a large scale. But then I feel that White's ikken tobi gives him an easy game.

So in order not to make life too easy for White, I'd vote for an aggressive boshi. Black 2, that is.

Since Dave hasn't posted his solution I will sell the secret and say that Sai likes ogeima at tengen. It would be interesting to read why. 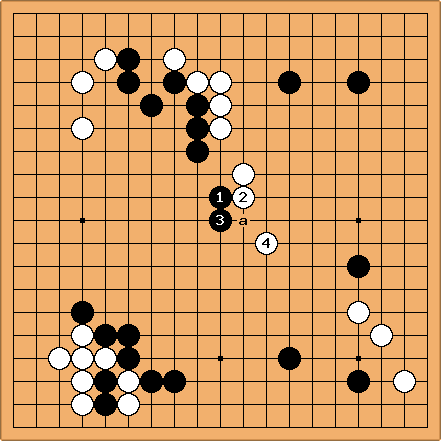 Maybe this is too loose play as play by White, but it is she who gains momentum. Alternatively: 4 at a: White is strong, Black is too tight. 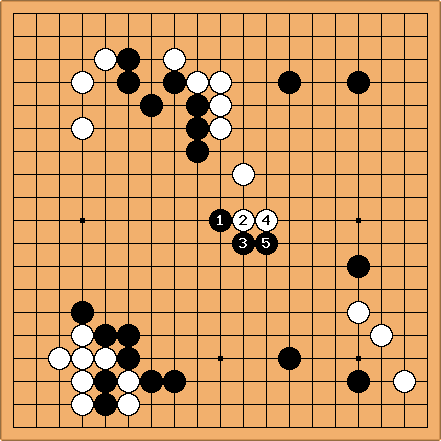 If instead ogeima, it is Black who gains momentum and builds a moyo.

I think this is an important message (or reminder as the case may be :-) for people trying to improve. We can not get much stronger by simply exercising the skills that we already have. We have to constantly stretch ourselves to acquire new abilities and insights. We have to push harder and learn to handle the increased complexity and instability that naturally results.

Charles The answer given is also a good example for haengma. 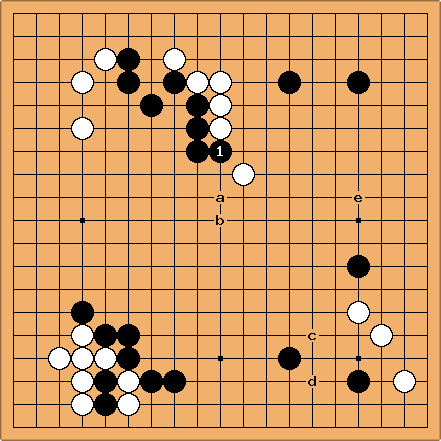 TakeNGive (10k): I must be dense... why is Black's cut at J13 wrong? Is it because then White around c (then Black d) lets White have a big right side with something like e? (a = Hikaru's keima; b = Sai's preferred ogeima; 1 = what looks natural to TakeNGive.) 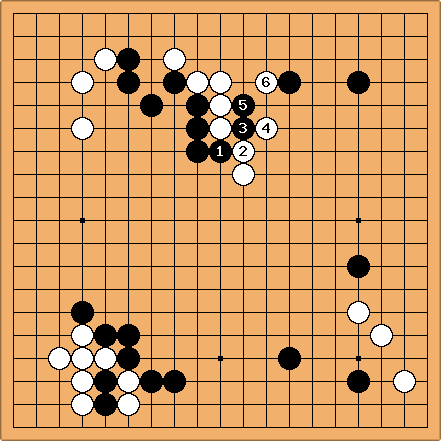 KarlKnechtel: My instinct actually is to avoid 'contact with the enemy' for now, and reduce White's ideas for invasions etc. 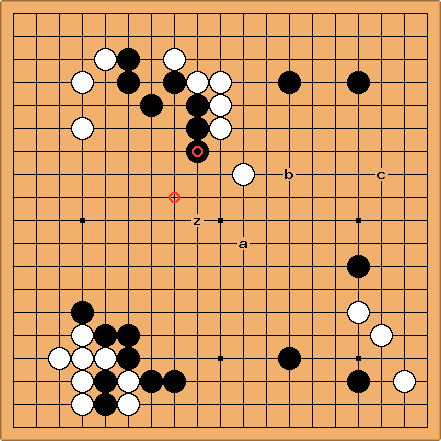 Any of these moves occurs to me. Black a starts to make a huge moyo (but White can push in between a and the marked stone right away - so maybe z is better for that idea?). Black b builds the influence on the upper-right even further, while c aims to make quick territory there.

But the ogeima does look better than the keima to me, for a few reasons: