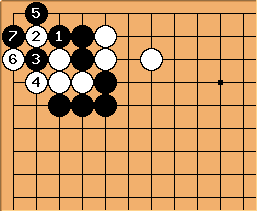 LukeNine45: Is this the answer? It doesn't seem like a very useful ko...

pwaldron: You're close, although what happens if White plays 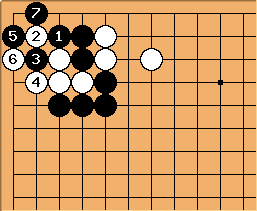 LukeNine45: Ah, of course (this still doesn't seem great, but my intuition says it feels right). Ironically, I actually thought about this but I had misread the variation in the next diagram:

pwaldron: This diagram (and the following) look correct. When you say they don't look great, you have to compare the result to the alternative, where Black loses his stones without compensation. While it won't be easy for Black to win the ko, he will get something for the effort. Black can also do nothing and force White to put an extra stone into the position, in which case Black's compensation is getting to play an extra move on the outside. 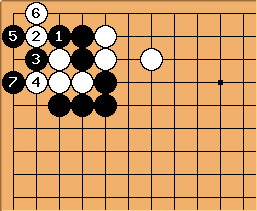 So from this we can see that I misread the descent 100% of the time (er, all two times). hehe.