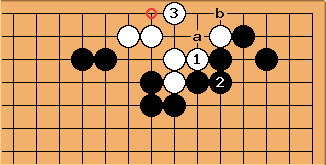 White 1 threatens a double atari, in which case White escapes. Next White occupies the vital point at 3. In terms of life and death, the points a and b are now miai, while the circled point provides an eye.

If instead of 3 in the main line, White plays at 1 here, Black occupies the vital point. Up to 9, White lives with ko, for Black can start one at a.

If we make the exchange of 3 and 4 first, this shape is a notcher with code 213WN, which White tries to make alive with 1. 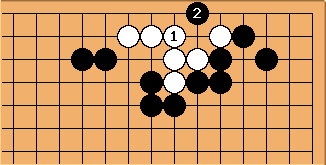 For someone familiar with notchers, it is clear that White 1 is not the correct way to make the group live. Black 2 becomes the vital point. 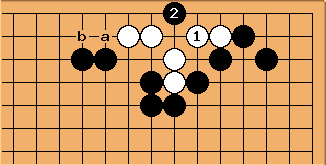 This White 1 fails: Black takes the vital point and reduces the shape to 6 in a row which is dead. Incidentally, if we make the exchange White a - Black b, this is a notcher of code 123NN. 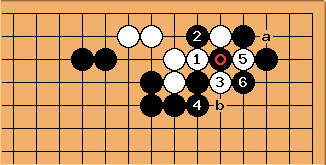 If Black permits the double atari, after White 7 at the marked stone, he faces either the capture at a or the escape at b. 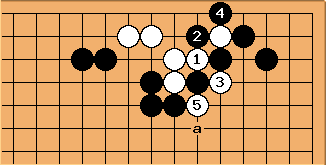 Black could answer the double atari

. White gets out in this variation, but Black can still attack later on, perhaps with a.

Back to Kanazawa Tesuji Series
Go to Problem 58