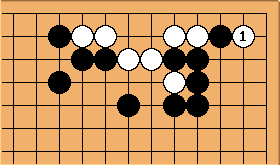 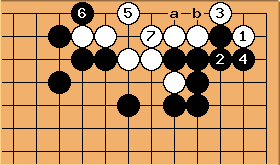 After the sequence to 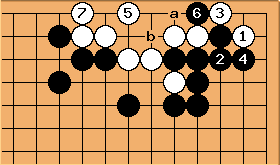 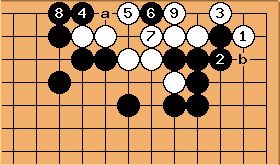 After this sequence, White makes miai of a second eye at a or one at b in the corner. 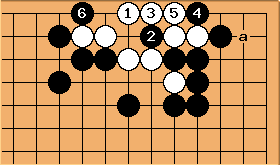 Black can play at

and gets the hane at 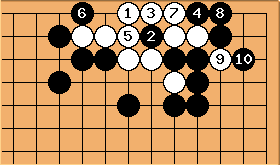 Here White gets only one eye at

looked like a shapeful move, but ironically ended up giving away an eye for no reason. It's still too late for the clamp, because Black just connects, and if White tries to cut, the ladder doesn't work (moves

, etc. leads to the mirror-image diagram (on the first three lines anyway).

This could be seen as another application of play on the point of symmetry, though in a perverse sense: since White's position has an even number of stones in each line, the position is symmetric but there is no point of symmetry to play on, suggesting that maybe White should try something else - in this case, the clamp.

At any rate, it appears that (of course) White should just follow up on the clamp if it's ignored, and run into the corner. 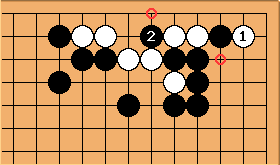 Karl Knechtel: How should White respond if Black ignores the clamp?

This is my best reading for each of the circled alternatives: 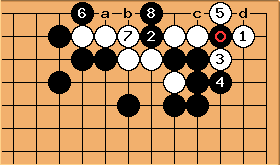 That seems to make miai of a and b to cut, resulting in eyes at c and d, but maybe I'm missing better play for Black. 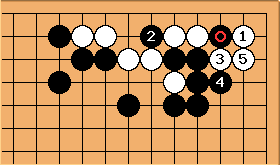 unkx80: Nice try, but why not play

as in this diagram? In any case, White should always play Line 1 rather than Line 2 as white gains an entire corner.

I leave it to you to see that Black 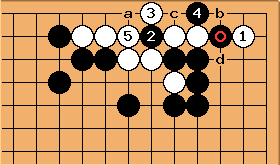 That seems to leave eyes at a and

, because Black must approach at b in order to take away the eye at

and c seals it off. The throw-in at c doesn't appear to work either - even if that didn't put the marked stone in atari after White captures at b, Black can't prevent White from making the eye at

, and three stones in front of a prevent the hane from stealing that eye.

But... in that case... since the clamp didn't come into play, why can't White play like this to begin with? I.e, play at a or

above, and capture at

when Black applies pressure? Studying the "without the clamp" diagram further suggests that it's because playing there first tips White's hand; Black starts diagonally across (obviously, to avoid auto-atari) and after that, if White tries the capture, the EyeShape has been destroyed by playing at both points on the first line.

, White can play at d to capture the marked stone.

Problem 24
Back to Kanazawa Tesuji Series