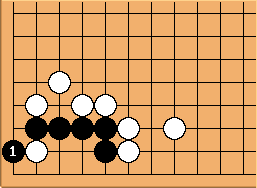 Starting at the 1-2 point to prevent White from linking up, and simultaneously occupying a vital point, is pretty obvious. 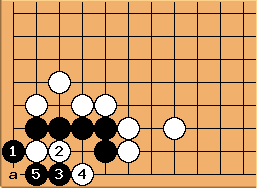 White's stiffest resistance is to play

is a nice tesuji using the special properties of the corner. If White captures two stones at a ... 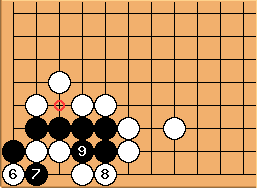 !! If White now connects her stones at

creates shortage of liberties. Note the liberty at the circled point, without which Black would not be able to execute this tesuji, since 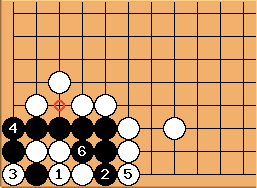 is just in time to capture the lot without ko. Once again the circled liberty is necessary to make that possible. 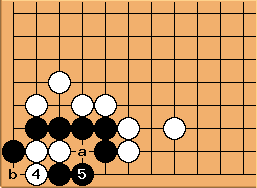 makes seki. If White adds another move at a or b, she almost fills Black's eyespace with one of the bent four shapes that give life. 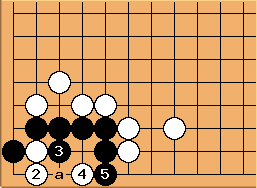 If White takes the other 1-2 point, and destroys the eyeshape with

at a dies in gote. Question: As Black has outside liberties, after

at a, can't Black capture White's 4 stones and live?

Answer: yes. This is in the realm of endgame, and correct timing of plays, rather than life and death. If white plays at a too early, black should ignore it and take sente to play elsewhere. Then it might turn into seki, if the outside liberties get filled before black comes back to capture the white stones. 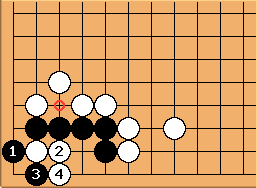 If Black fails to see the tesuji, and falls for the temptation to occupy both 1-2 points instead,

creates a ten thousand year ko. Note: in case the tesuji mentioned above doesn't work, since the liberty at the circled point is filled, this is Black's best option. 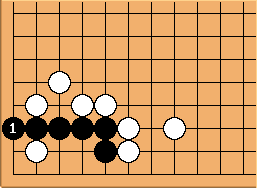 The only other option we have to investigate is

here: it also prevents White from linking up, and if it worked, it would perhaps make more points than the correct answer. We will make this another problem: Gokyo Shumyo, Section 1, Problem 20b.

Go to Problem 21
Back to KanazawaTesujiSeries