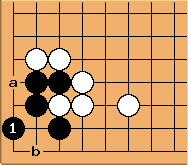 is the only move. After

, the points a and b are miai for life.

Related proverb: strange things happen at the one-two point - in this case you need to know which of the two 1-2 points, of course. 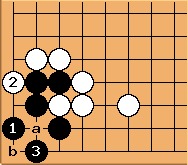 Black has two sure eyes at a and b.

If White next blocks at a, Black makes a big eye at b. And if White draws out at b, Black enlarges the eye with a.

NB: if White has a stone on one of the circled points, her move at b suddenly works and Black is dead, although a lot of aji remains, because he can break out into the centre (in this position).

followed by B a, W b and B c shows that White cannot escape without an extra stone to right. Thanks to Jasonred for clarifying this. 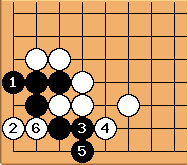 seem to make the most of it, but when White cuts at 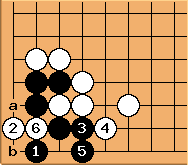 If Black plays at the other 1-2 point, it is also wrong.

are miai for the kill. After

, Black can play neither a nor b because of shortage of liberties. 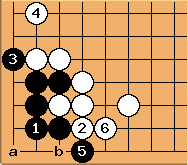 here is also wrong. White can even respond at ease to the hanes at

, because whatever Black does, the points a and b remain miai for the kill.

Finally, what about making the corner eyespace as big as possible, with

, threatening to capture three stones. Black has to make a solid connection. This is as in Gokyo Shumyo, Section 1, Problem 1, but with a white stone at

, and Black is dead.

White at a kills the black group with two more white stones. 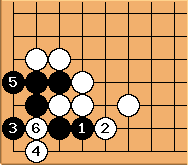 block on the outside.