AvatarDJFlux: Dear fellow Deshi's, the latest GoWorld I've got (n. 97, Spring 2003), came with a merryment and a puzzlement...

The merryment was the cover second page, with the usual Kiseido ad about their book Making Good Shape: the authors are given as Rob Van Zeijst and... a Richard Basilic%%% I assume that Basilic is a (very yankee?)corruption of Bozulich but I wonder where they got this wrong: in the previous issues the same ad had the right name...
Still Basilic is so beautiful... ;-)

Now the puzzlement: in the commentary about the first game of the 27th Meijin-sen between Yoda Meijin (W) and Cho Oza (B), I stumbled in the following position: 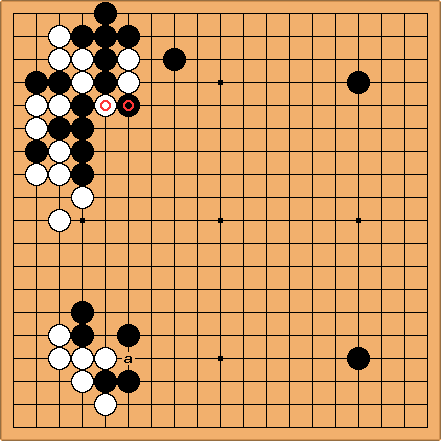 Cho has just played the marked black stone, and the question is: will Yoda escape with the marked white stone? (He won't: he will play at a...)
GoWorld reports Ishida comment: "If White extends to

in the diagram below, Black will cast a Net with 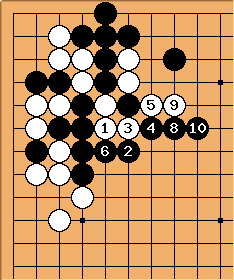 Ishida: "The Hane of

(in the dia below) is severe, and the cut of 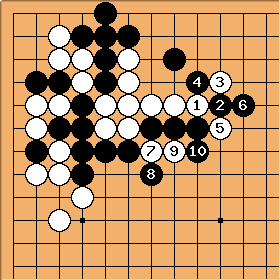 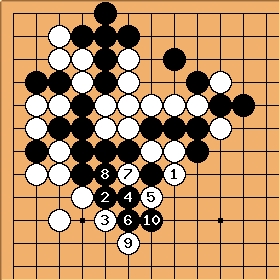 Ishida: "The sequence to

(in the dia below) is inevitable and Black is one move ahead in this race. White's prospects are bleak." 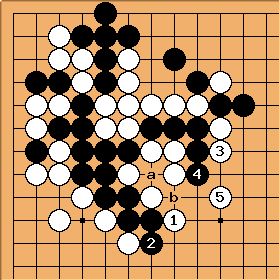 Now, I must have hallucinations and terrible blind spots, but for the pimples of mine I cannot see how Black is ahead! To me it seems that it is White that will capture.
If Black takes the Ko at a White just connects at b and black is taken in a Geta.
I cannot really see Black having one more liberty! Just the other way round...

Dieter: I have been staring at the same diagram some time ago when I received a copy and the comments are certainly flawed. The only way you can understand what happened is by reading the comments on page 16, at the top and around diagram 10. At the bottom of page 15, White and Black should be reversed and then the whole lot of comments makes some kind of sense.