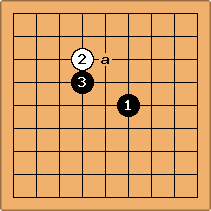 If you are Black, attack as early as you can, such as

if it is weak and near to

. A good attack should make

stronger and requires White's local response (sente). Next, hit White harder at a if

is ignored, which will make

even weaker and the black group even stronger. 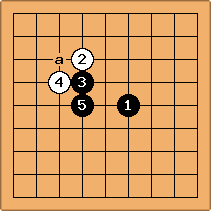 is gote, it makes the black group very strong--hard to cut or capture, and influences more than half the lower zone. White still has a weak point to fix (a) as it can be cut during the battle to come. Nevertheless, White is a strong player (4 dan GQ), he does not fix it until move 10. He plays other moves that are more urgent or bigger. 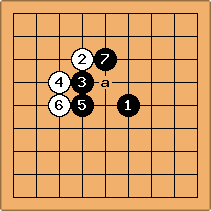 Any hane will creat a new weak point.

creates the weak point at a, but

serves as a backing army, which makes it hard for White to attack at a. A hane attack is good if you have an aid unit, such as 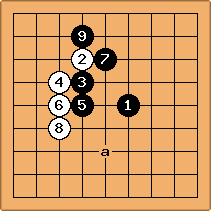 a is too defensive for Black to play; I don't like it.

looks slow but it attacks

, defenses the upper right zone, and also sente. I like it. 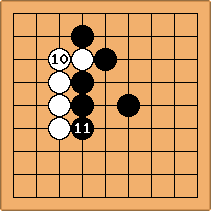 builds a wall against the enemy's wall. It strengthens the weak group of Black, and blocks White from easily jumping eastward and reducing the influence of Black on the east side. 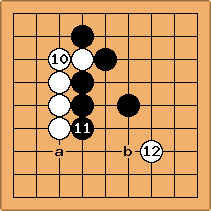 is pretty strong. Normally, I don't attack a pretty strong stone as it can extend happily unless I can push it extend toward my strong group. Otherwise, I should attack the west, which affects the east instead.

But here a is not interesting for Black as this white group is very strong and will be even stronger if Black plays a.

Focus on the enemy's weakest army. Here, it is

. Attack the weakest stone by pushing it move toward your strong group. To do this, I play b, which is 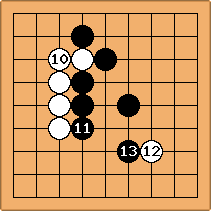 forces White to move upward from

which cannot connect with its strong group on the left. This is a both attack-and-block move. 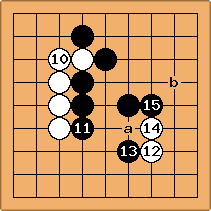 a is solid but it allows White to escape with b and compresses Black. Don't play a.

makes Black firm and hard for this white group to base. This is the art of confining. 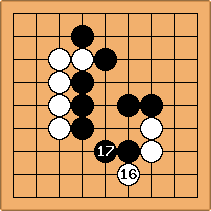 is a safe and strong move. Be kind. Allow the enemy to live in a confined area. 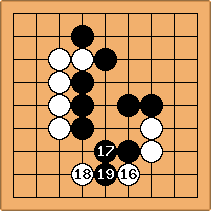 Cut it if you have a sharp knife, 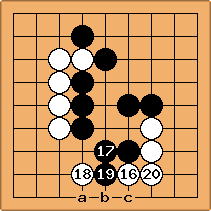 Avoid gote and small cutting moves. Don't play a, b, or c. Eye a bigger cutting. 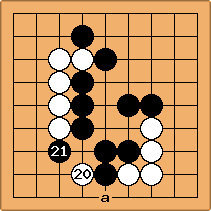 is cutting by stratagem--cutting the enemy without using a knife, e.g., move a.

both attacks the white wall and split the white army.

and the great white wall will never be linked. This is called killing two birds with one bullet. 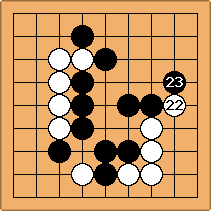 A defensive but sente move, such as

, is good, if there is no bigger move to play. 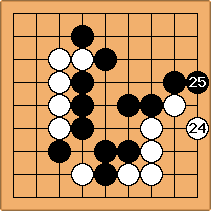 is a very strong sente defend. Sente defending is good. 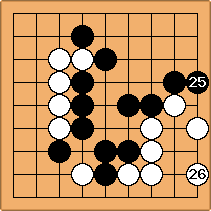 is a pure gote defend, to make this group immortal, as the big black group is already immortal and can somehow swallow the white group. 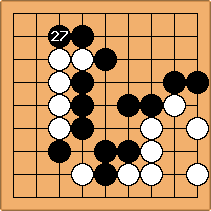 Once the enemy is well confined, play somewhere else big and sente (if any). The white group on the right-hand side has no way to go outside; Black can enjoy a big move, like

, which also attacks White, defends the top right conner, and fixes the weak shape of Black that invites a sente attack of White.