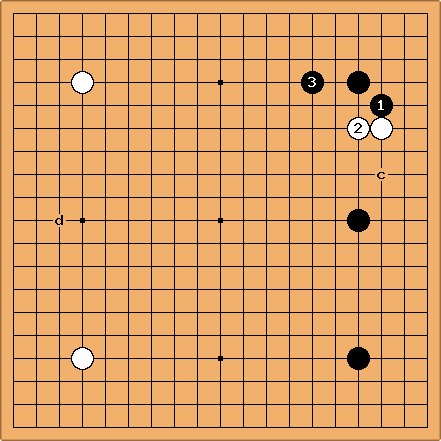 is b), because the Black stone in the middle of the right side prevents White from getting a good extension from her two-stone wall, while black makes territory along the upper side and reduces the threat of a corner invasion. White is heavy now.

grolich: While you are correct, I thought it is worth explaining the reasons better, since one of your reasons shows a slight misunderstanding: The reason is indeed that white does not have a base, and will have a weak group. Black will benefit from attacking this group. However, You said it makes territory along the upper side and reduces the threat of a corner invasion. I just thought I'd take this opportunity to clarify this issue: black has not made any real points on the upper side after the sequence, and while it will end in gote now, the corner is still completely open for invasion at the 3-3 after this sequence. White can live.

However, it is still the best sequence for black. The reason is that pressure and attack are usually more important than just points. Black willingly leaves the territory for white to invade in gote later, to gain even more profit by attacking and chasing the white group.

White will not invade the corner while his group is weak though, so the corner will probably remain as it is for a while.

Warder05: It probably bears mentioning that this sequence is quite useful for high-handicap games since it depends on the presence of a stone at both star points (which in high handicap games is a given). Also, the follow-up moves on the part of black help to build box-shapes elswhere on the board. 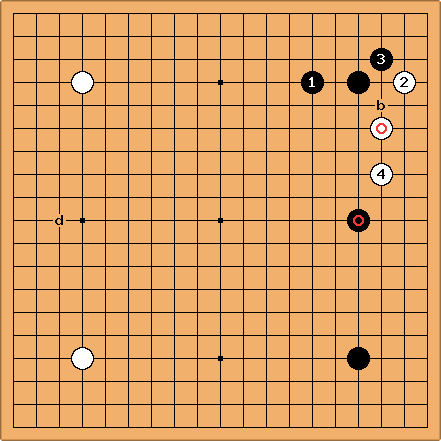 unkx80: Firstly, note that d is off topic as the center of attraction is now how to deal with the marked White stone.

If Black chooses 1 (a in the problem) then White 2 and 4 easily makes a base inside the san ren sei framework, which goes against the san ren sei principle of attacking the invading stones. Also, after White 4, the position of the marked Black stone is odd. 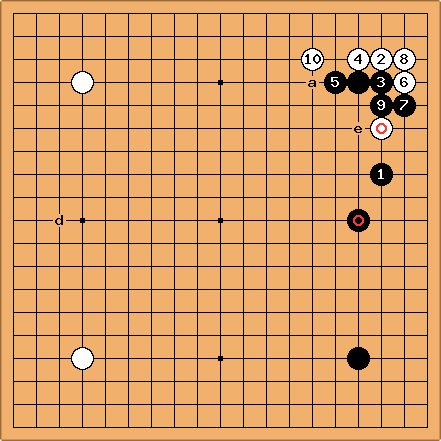 If Black chooses 1 (c in the problem) then White will gladly exchange the marked stone for the territory in the corner in this commonly used fuseki. Now the marked Black stone makes the entire shape overconcentrated, the shape would look much better if the stone at 1 is placed at e instead. 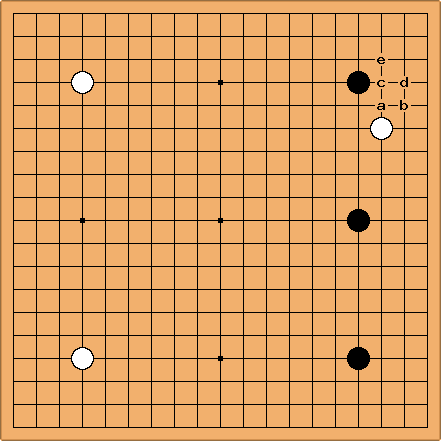