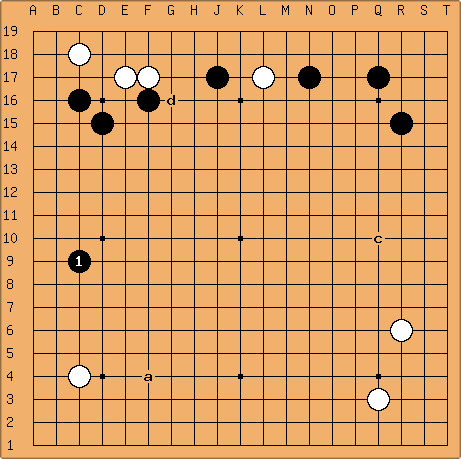 Scartol: The point a seems very important, because if White goes there, she starts to make a huge bottom moyo. But

is a dual-purpose move. It limits White's moyo and helps to stabilize Black on the left. So I would play there.

Dieter: I seem to remember the answer to this problem. I'll try to hint at the answer by giving some proverbs. Not all of them point to the correct answer by themselves but together they certainly do.

HolIgor: I don't know the answer but I'd play at d.

Fhayashi: So what is the correct answer? d seems to fit the proverbs given above better than the

as shown in the diagram.

RafaelCaetano: I think d is the only move. Why isn't the answer given? Scartol, you are the one who created the page, right? :-)

AlainWettach: I also think that d is the only move. It is an urgent move which should be played before big ones (a for instance).

Vlad: Is d that big without

? It doesn't make any territory... But in a real game I'd have played that too :)

Bill: Yes, d is huge. (I apologize for my earlier joke. I thought that the solution and explanation would be forthcoming soon.) 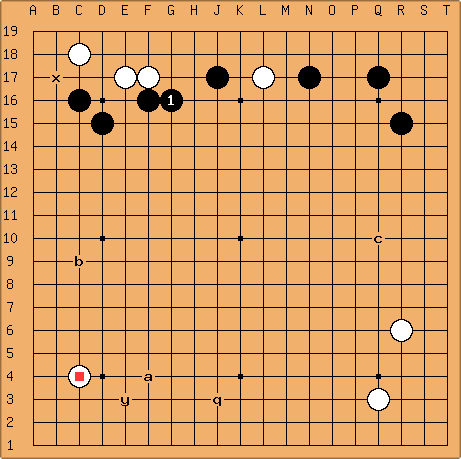 As played by Ota Yuzo against Shusaku in 1853, by the way. Followed by White x, Black y. Charles

Andy: The "Followed by White x, Black y" is the crucial point. Black can only play

if white has to respond on the top since black must be able to address what white is doing on the bottom before white has a chance to add another stone there. Black at b is not so good because the marked white stone is strong in this direction, making it uninteresting. A black play at either a or y interferes with the direction in which white would like to play. The question thus is: does white really need to answer B1@d? I suppose the answer must be "yes", although it's not obvious to me anyway. Does white have the option to response to

with a move around q, or does that let black kill in the upper left?

Bill: That's not so, Andy. This kind of position does not arise much these days, because of komi and changing styles, but if you look at ancient games (pre-20th century), you frequently see plays like d that are not sente, nor do they have a working extension, like

in the solution simply because it is ultra gote. Now i do understand that moves in macro like this can be more beneficial. The local scope moves can be ignored for bigger gains elsewhere. This however is gote and isn't a good move for that reason. If the intent is to make a positional move in the macro game than it shouldn't be easy to ignore. In this way we draw whites attention from the potential advantage they can gain at d. this is a good secure move in the fact that it seeks to claim a large chunk of territory however that is it's only reason for being played. This is also another strike against it. From my understanding good moves typically have more than one reason or goal.

If I may, A demonstration. 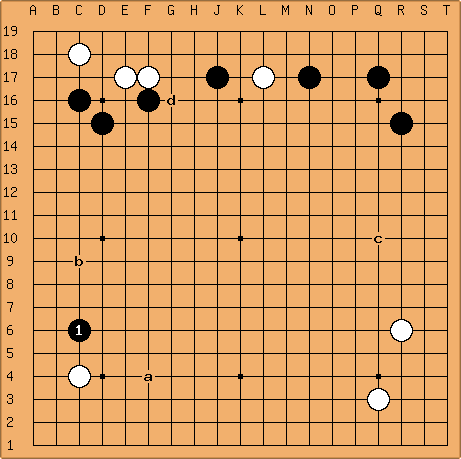 The move I made wasn't one of the options but here we can achieve the goal of placing a stone at b at some point in the future for a move in gote. Planning on goat is never a good idea i don't guess but I'm not a pro player so I'm allowed to have bad strategies. :)

grolich: Your move is not small. However, there are 3 problems with it: it is the wrong move to respond to what white is doing on the bottom, which is the biggest thing happening on the board right now, in addition to being gote. white feels no need to reply localy (so it can end up as a gote move for points aiming at a second gote move for points, and points in gote are the smallest kind of points you can have). However, the most important problem with it is that G16 is urgent. urgent moves come before big ones EVEN in cases where there is an absolute guarantee that the opponent will not respond.

if white plays at G16 himself. in one fell swoop, his corner group is not shut in and has a future (which is quite big in itself), isolates the black J17 stone, which in turn strengthens the white L17 stone, and it can actually start hurting black immediately if no steps are taken, and as a result gives white a nice future on the top edge while destroying black's potential there, and at the same time giving white follow ups to break into the center and remove black's thickness there (notice it is not easy to keep that group from the center even with another move by black after a white G16). Compare with black playing there: no weak stones, and a lone isolated white stone, with the white group being shut in. if white tries to run with his lone stone, black is ecstatic: he will gain a lot on both sides while attacking it. Also, black solidifies his thickness in the center.

the move is urgent because it holds within it the future of several important stones. therefore, it is a lot bigger than any single big move.

mike?: Black at 'd' is the best because to me it is a forcing move and will disconnect the white stone at the right if he doesn't respond. If white gets through he will have influence on both sides.

Windir- the Hint was Urgent before big. D seems very urgent because if white hane he break through center and black becomes weaker. b is surely big but not so urgent.

Timm I don't think playing on the left side is all that important because White's komoku is on the third line and hasn't any development perspectives there for now, plus it's strong by itself. If White was to play a big point that'd be a corner enclosure or a Chinese fuseki-like extension, and Black could then play on the left, maybe leaving invasion for later  there's plenty of options. Similarly Black should normally play on the bottom first.

But d would be too good for White, Black playing there ensure the top white stones won't cause much trouble. I agree it may not be sente for now because huge moves are left on the bottom and left, and Black could be overconcentrated if he played there again. But as soon as a few moves are played on the bottom and left, the follow-up at B-17 will become pretty serious and White will have to return and fix.

Before Black d it seems White can create a lot of problems, after it seems that White's the one who's about to be bullied. :) Also if Black played a, White could totally jump on d and manage to keep sente to answer in the bottom left corner anyway.

Move on to: Fuseki Exercise 4