RobertJasiek: For basic kos, a formal definition of disturbing ko and its subtypes is available in the paper 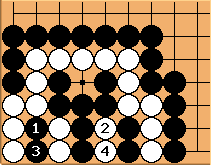 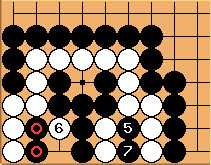 Ing calls this a disturbing ko. Under a superko rule White cannot capture the

, as it would repeat the original situation. Black threatens to capture White's group. In what sense are life and death settled?

Ing allows White to capture the

stones, because this is a disturbing ko. So White (and Black) are alive.

Ing's first set of rules included a superko rule. However, Ing later rejected a superko rule for two main reasons. First, it may be hard to recognize and administer. Some superko cycles involve dozens of moves, and, even knowing that there is a repetition among those moves, a player or referee may fail to recognize it. Second, some superkos offended Ing's intuition. In particular, two double ko death positions could become a superko in which one of them might live. Ing believed that life and death was already settled in those positions.

In my opinion, Ing attempted to capture that intuition in his rules, but did not quite succeed. That is why his definition is unclear and circular.

Looking at Ing's examples, we might guess that he believed that in disturbing kos, two internal breaths guaranteed life. However, he could not say that, because one of his main principles was that life and death are determined by play:

Of course, actual removal cannot be used to define a disturbing ko during the game, because of the circularity of the definition. However, it may be possible to distinguish fighting and disturbing kos by hypothetical play. The question, as Ing says, is whether the stones can be removed, not that they actually are yet removed. And after all, in the example that offended Ing's intution, he had to be able to determine that each double ko death was dead without actual play. I believe that Ing gave a basis for such hypothetical play in the following statement.

By contrast, in a fighting ko the players do fight over hot stones.

OC, there is no guarantee that this hypothetical play will agree with Ing's examples. We are not trying to capture Ing's intuition, but to make a logical distinction based upon his principles. 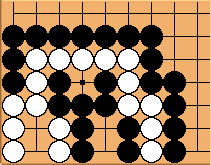 In our first example, neither player is in immediate danger.

However, if Black plays

White must reply with

puts White's large group in atari, but White saves them with 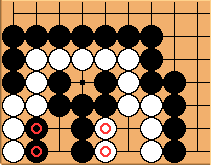 are potentially hot stones, but if they cannot be taken back, both Black and White stones are safe.

After a pass or play elsewhere, which would lift ko bans, Black could continue the attack, but would simply return to the original position, making no headway. White is similarly unable to capture or kill Black.

Life and death are settled, with both alive. 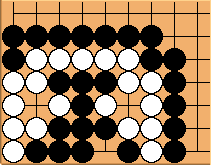 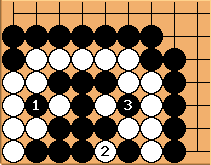 we have this position. 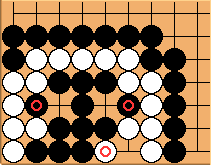 stones cannot be taken back, then the White group is dead. If White passes or plays elsewhere to lift the ko ban, Black can capture White's group. (It is OK to capture a potentially hot stone {

} if doing so destroys the potential ko by capturing other stones.)

So in the original position whoever plays first can take the opposing group. Life and death are not settled. This is a fighting ko.

This is the basic idea. More needs to be said to make it precise.

(Later.) I have found a ko rule that produces the same effect as this kind of virtual play, without requiring the fighting/disturbing ko distinction. I think it is preferable to use it. See Ing-Spight ko rule.