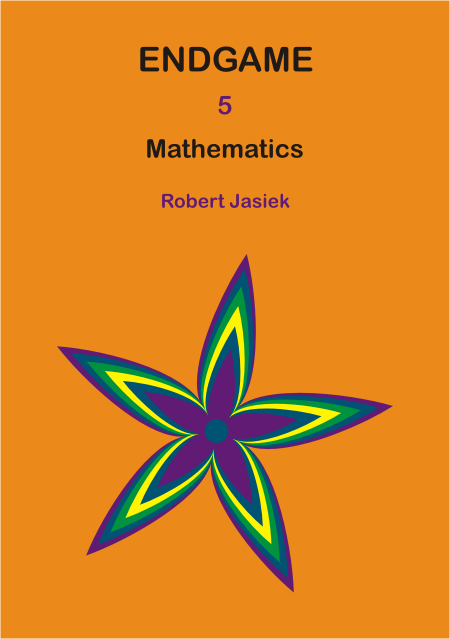 Endgame 5 - Mathematics is a book by Robert Jasiek about theorems and their proofs, being volume 5 of a series on the endgame.

This mathematical textbook with definitions, theorems and their proofs establishes endgame evaluation as always correct truths. The book studies most important aspects of modern endgame theory. Introductions, many remarks and examples, 20 tables, several game trees and a few thermographs assist the reader.

Endgame 5 Mathematics justifies and verifies most of the theory of endgame evaluation of Volumes 2 - 4 and introduces further advanced theory. Besides excursions to combinatorial game theory and scoring, by far the largest part of the book develops modern endgame theory as the new field of endgame evaluation. While combinatorial game theory, which can be applied to various games including go, could explain the microendgame and provide some very general but rough approximations depending on the larger temperature, modern endgame theory better describes the large late endgame by de-emphasising the last move of the game and the early endgame by emphasising tighter approximations depending on the smaller drops between moves.

There are especially the following few exceptions of theory the book does not explain. The chapter Microendgame only studies a few new details of the microendgame (see Volume 2), which has already been established by the literature on combinatorial game theory. Consult it for difficult kos. The book shows the limitations of the method of making a hypothesis in Volume 3 so that the advanced and tedious tools of thermography remain necessary for the most difficult shapes of local endgames. It remains an exercise for a future researcher to prove the principle of extreme difference values for iterative local endgames in Volume 4. Although the book can be read independently, Volumes 2 - 4 provide the practical side of the theory for improving one's playing skill.

The combinatorial game theory in chapter 2 and sections 4.3 + 4.4 describes the basic calculations involving algebraically represented positions and their resulting scores, difference games, and simplifying positions by ignoring dominated or reversible plays. This low-level theory can be used directly but a few proofs elsewhere in the book also apply it. The model of a rich environment enables the definition of count and move value more elegantly than the literature's older definition relying on an infinite number of multiple copies of a position.

After this preparation, long sequences can be evaluated by T-orthodox (worth playing successively), the orthodox forecast and accounting theorems, the sentestrat algorithm and thermography. The iterative algorithm of calculating a thermograph algebraically is explained in detail together with step-by-step calculations deriving the counts, move values and thermographs of an example position and its followers. If you found the literature on combinatorial game theory too hard, the careful selection and new study in this book give you a fresh access in a simplified and go-friendly notation.

The book studies the following topics of modern endgame theory: definitions of the basic values and their relations, identification of the types of local endgames, evaluation of local endgames with short or long sequences, the value of starting in an environment and modification of alternating sums. Half of the book determines the correct move orders, and first and last moments of playing in a particular local endgame instead of the environment.

The timing is solved for either starting player, all temperatures of the environment and all basic types of local endgames with arbitrary values: a local gote, an ambiguous local endgame or a local sente with one or two simple follow-ups; a local endgame with gote and sente options; pairwise comparison among several local endgames each with one player's follow-up.

During the late endgame, the solutions are exact if the environment comprises simple gotes without follow-ups. In practice, tactical reading can stop whenever such a position is reached. During the early endgame, the solutions are the best available approximations. The proofs presume such an arbitrary environment or sometimes the model of an ideal environment. In practice, such environments closely resemble ordinary environments of quiet positions without active fights and also allow application to local endgames with iterative follow-ups.

We learn the basic values: count, move value, gain and net profit. The largest value of the environment is called the temperature. We sometimes also consider its second-largest value. During the late endgame, it can be necessary to calculate the alternating sum of the environment's remaining simple gotes by adding the values taken by the first moving player and subtracting those taken by the opponent. More sophisticated alternating sums accelerate calculation by ignoring the immaterial values. Conditions in theorems compare the relevant values to describe correct decisions between playing locally or in the environment.

We characterise each local endgame as a local gote, ambiguous or local sente so that we calculate its correct gote or sente values. We also learn when it is better to describe a local gote by sente values or vice versa. The type of an ordinary local endgame is determined by four alternative value conditions, whose equivalence we prove. Similarly, a local endgame with gote and sente options permits two alternative value conditions. We prove the non-existence of local double sente.

As expected, evaluation of local endgames with long gote, sente or reverse sente sequences is much more difficult because we must determine for how long successive local play may proceed before continuing in the environment. For this purpose, the book establishes these methods: comparing the opponent's branches, comparing counts, comparing move values, thermography and making a hypothesis.

The book does not just solve local endgame positions in environments during the late endgame phase but even presents a fully developed theory with different, alternative methods and proves their equivalence. The methods of comparing either counts or net profits replace the too complex tactical reading by only considering two particular test sequences. The method of applying a principle disregards sequences; instead, move decisions only rely on values.

The theory of scoring relates area to territory scoring and parity to the winner, describes the impact of approach moves and proves the equivalence of life defined by capturability or two eyes.

The average level of difficulty of the mathematics in this book is that of the first year of study at university. You can understand much with school algebra. The rich variety of proof techniques is a great source for learning them. Most definitions and theorems are understood easily like principles. The mathematical proofs are as detailed and step-by-step as is common at school. This is unlike mathematical books or journals read at university, where the student needs to think 30 minutes per line of text. The diligent reader has a chance to understand even the advanced proofs of this book by spending half an hour per page. A reader skipping the proofs misses half of the book's contents but can still learn a lot.

We study the fundamentals as well as advanced theory. We prove both the 'obvious' and the difficult. However, allegedly obvious theory may be easy or difficult, and has required between 20 minutes and three weeks per proof. Some proofs need one line applying theorem A to theorem B while the longest proof studies 30 cases on 11 pages.

A professional mathematician has proofread chapters 2 to 5 and I have proofread everything, especially the mathematical theory, several times very carefully.

The inventors of mathematical theory, such as theorems and their proofs, in this book are as follows: the author Robert Jasiek 82%, Bill Spight 13%, others 8%, unknown 13%. Note that 15% of the theory has been developed by two, or in one case three, persons.

Why does the book make such a great progress? Combinatorial game theory has evolved for more than a century. Bill Spight has done pioneer research in modern endgame theory for decades. Eventually, I have spent circa 15 months on full time research for this book and years of further endgame study for my other endgame books. Informal go theory was conceptually limited whereas modern endgame theory profits from the power of mathematics.

The mathematical contents uses a generous layout while the commentaries on examples are dense and sometimes refer to several theorems. Mathematical text uses a font that eases reading and resembles script in block letters. Clearly, the book emphasises the theory. Nevertheless, the examples cover all important or rare cases proclaimed in theorems or proofs.

Obviously, the book is not for players preferring informal go theory to mathematics. Read the comprehensive Endgame 5 Mathematics if you are interested in the endgame, mathematics, the most advanced new theory at its highest level of truth and its verification.

The table of contents is available

at the authors site.