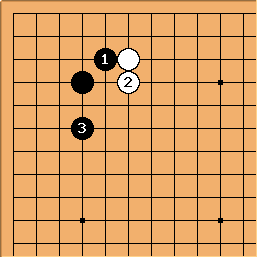 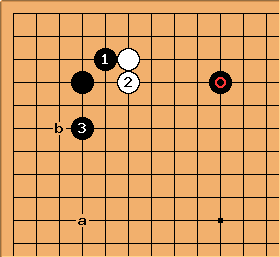 The 3-space high pincer (or the invasion of the 5-space high extension) is what might be called the "base case" for the diagonal attachment. This is because it is a fundamental position in high-handicap Go. As a result, it appears often in books for beginners or for those trying to improve their play against stronger players. The analyses that we see in such books normally assume that the upper right corner is Black. This may or may not be the case in actual play. Many of the analyses are also based on having a Black stone on the left side at a or a point nearby. This also may differ in actual play.

Basically if there is no Black stone around a, there must be a reason why White does not play from the open side at b. This may be that the position in the lower left makes it very unlikely that White can make territory along the left or that there is a strong White position in the upper right that will allow White to attack the marked Black stone. 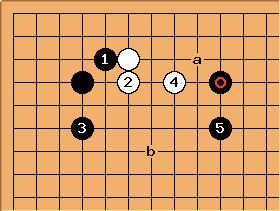 White has enough space to extend to

and this is by far the most frequent line of play chosen by White at the professional level. There are many possible continuations for Black depending on the surrounding circumstances. The jump to

is the one most often seen in actual play. The diagonal play at a instead of

is often seen in books but seems a little too slow between pros. It was used in the 1970's and early 80's but has more or less died out since then. The Black play at b instead of

is an important idea when the left side is important for Black. 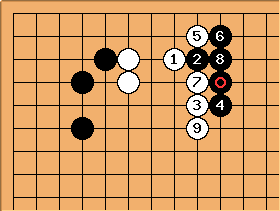 The low extension at

here is also played. This threatens to slide underneath the marked stone to 6. The diagonal attachment at

is one answer, most often leading to the standard exchange of 3-9. 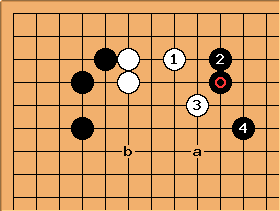 The calm descent to

here seems better. It prevents the slide but gives White less to work with. White normally jumps out to