DJ: I have noticed that there are just too few commented amateur games on SL and, even if the Go Teaching Ladder may be the proper place to get a game commented, I thought that posting here a game commented by the players, while asking for stronger players' comments too, would reach two aims:

Having said so, I have chosen a game of mine recently played that features: a debatable kikashi, an interesting situation in the lower right corner with a variation whose developments could have been so nasty we didn't even dare to think about... (in fact that variation was left unplayed), a furikawari, some good fighting and... oh so many mistakes%%% I think mistakes are what make an amateur game a good learning occasion: as Peter Cook once said, "I've learned a lot from my mistakes: now I know how to repeat them".
Therefore I'll swallow my pride and show you the game: as you can imagine, the mistakes are mostly mine...
Comments, questions, answers are of course much welcome.

I am in general a weak payer (and in this occasion also the weaker), moreover my weakest point is the art of fighting: I therefore tried deliberately to play a slow and solid fuseki. I managed until move 23... 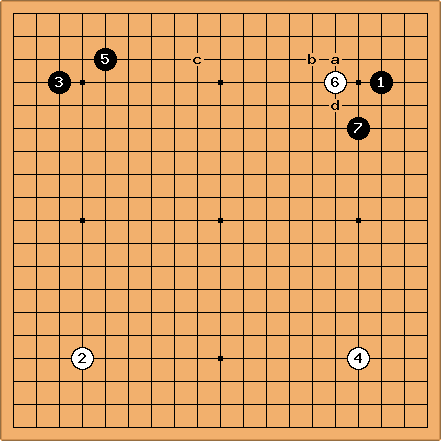 This is the first branching point: Carlo (white) could have played the today very much fashioned low kakari at a: but at the GCoR in most of the cases almost everybody plays the high kakari, which was fashionable when we learnt to play... :-)
We of course cannot tell which one is better or whether they're both playable. I probably would have played as in the game as well, because to me Black's pincers look less efficient in this position (any comment?).
Conversely, this is one of the reasons why I didn't pincer, the other being the fact that

is low and therefore I tought that developping the top side was not interesting. Then, with my limited knowledge of joseki, I had to choose the answer between and a and

(ehm, now that I think about it, I didn't consider tenuki...): I choose the latter for two reasons:

Therefore I played B7

pwaldron: From a quick search through my database, the pros generally favour the high approach over the low approach in this position. Regarding your concerns about attaching underneath at a, a White extension to c is to be expected, but I don't think it's too bad for you. You correctly point out that the top side is a comparatively small one, so forcing White to develop in that direction is not going to be too bad. Taken to an even greater extreme, you might consider playing d as a response to the initial approach. 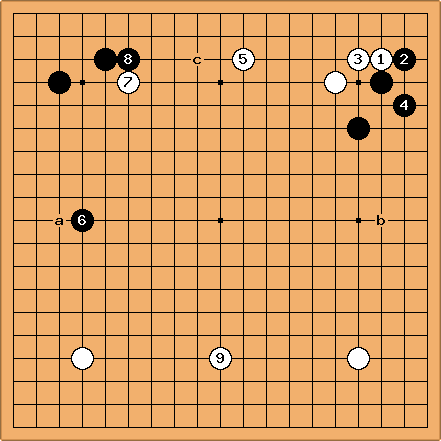 I almost always play high with

, but many kibitzers (a typical and constant presence at the GCoR...) suggested a. Who knows? Could Black have played b instead? I thought that at this moment the left side was more important than the right: I thought also that shimari in the upper left just begged to be developped. (But as the game went on I very much desired to have a stone on the RS...)
And then Carlo played the kikashi at

.
The kibitzers of course debated very much on its utility. Carlo said that then it was the only moment to have it answered on the inside (at

) and he didn't doubt a stone there would have proven useful later. From my point of view, I wasn't feeling bad, as it reinforces my territory and allows me to extend all the way to c (in fact my next move).
What do you think of this position? I thought it is somehow even: the UR corner is even (joseki by default are even, are they not? ;-)), and then there is Black' shimari + extension vs. White San-ren-sei: at my level I cannot assess which is better, so I have to think it's even. It's my turn, and then the RS is still to be played. 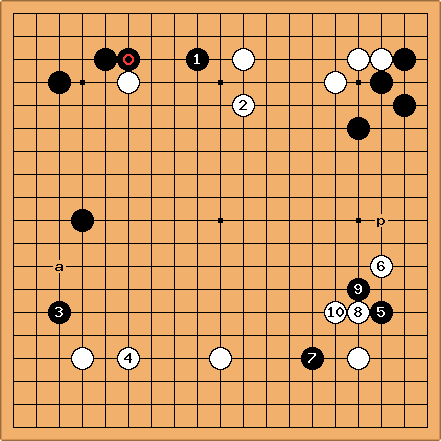 For the next couple of moves I felt I had the initiative:

(just the right extension from

does more for Black than

does for White (or am I an unsound optimist?).
Can White play

in a severer way? A pincer at a? I personally would not play that way, but maybe that's the reason why I'm still 2k. What happens? Below there's how I would have answered (I'm not sure about the sequence below, especially about the exchange

at p or similar looks interesting to me. Anyone care to comment? 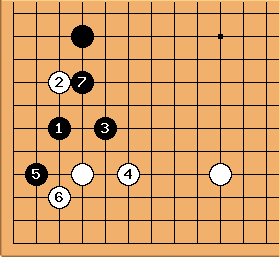 And finally we get to the main fight of the game... I answered the pincer of

, which seems good to lay waste of the san-ren-sei. I didn't even think of a more peaceful way of playing, but the diagrams below aren't very good for Black, if you ask me: 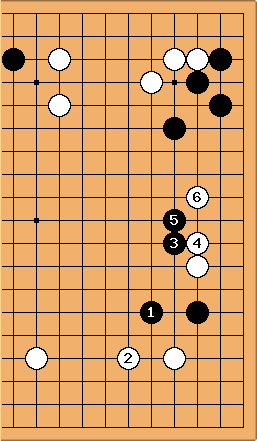 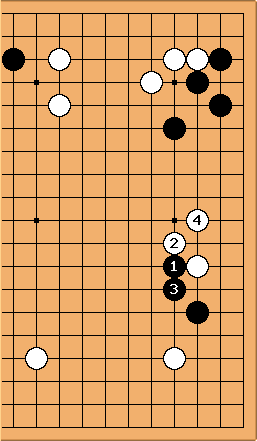 I was expecting the "normal" variation (as in the diagram below), but Carlo surprised me with the nobi of

in the game diagram 3 above. What happened next? Stay tuned for the sequel... 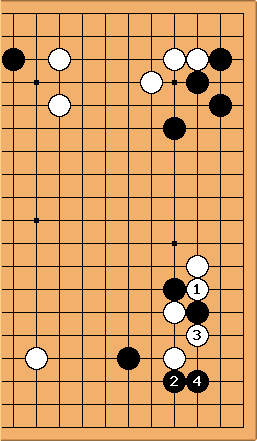 in the diagram below, Black can invade. I put forward some variations:

in the second diagram is necessary, else Black a,

and then Black ataries atb. Then

makes miai of c and d.
To avoid this White has to play at a in the first of these two diagrams and let Black connect at W0 there, but this still leaves a cutting point at b.

Alternatively, White can play as below: