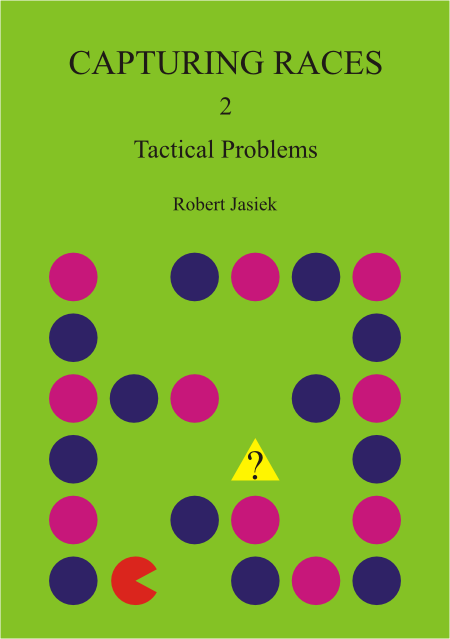 directly from the publisher and soon is also available from retailers.

The author and publisher of Capturing Races 2 / Tactical Problems is Robert Jasiek. The book is of A5 size, has 280 pages, has 6.5 diagrams per page on average, is written for players from 9 kyu to 4 dan and has the suggested price EUR 28 (printed book) or EUR 14 (PDF file).

Capturing Races 2 - Tactical Problems introduces theory, has 180 problems of capturing races and their answers. The book concludes with indexes referring to methods, concepts of ko and keywords of terms. For a decade, I have collected the most interesting capturing races from actual games, modified them suitably to create the problems and provided their analysis.

On 10 pages, the theory chapter explains tactical reading, the basic types of kos and capturing races (summarising Volume 1), and the most frequent techniques. We apply the theory when solving the problems. The five chapters with problems and their detailed answers fill the other pages.

In the first problems, we transform the initial position to a basic capturing race. The most difficult problems are divided into subproblems. The chapters roughly sort the problems by increasing difficulty. In tactical reading, variations are mandatory, alternative or optional. We measure the difficulty of a problem by its minimum of variations whose reading is mandatory. From the first to fifth problem chapter, the problems' average of mandatory variations increases from a few to circa 20. A dozen problems require reading of more than 50 and three problems more than 100 variations.

Unlike many problem books with only a few random answer diagrams, Capturing Races 2 - Tactical Problems always shows as many diagrams (up to 47 per problem) and includes as many additional text variations (up to hundreds) as necessary to analyse almost all relevant variations. The also described decision-making is important in ordinary or difficult decisions involving aspects of ko or the endgame.

We cannot circumvent tactical reading because the shapes are as rich as in the classics, and unusual moves and move orders occur. As an additional difficulty, correct first or later moves might be local or imagined plays elsewhere on the board to acknowledge already settled statuses or play ko threats. We learn how to fight for more excess liberties.

The theory chapter introduces the ko types including direct ko, approach kos characterised by their numbers of excess approach plays, flower kos, stage kos and perpetual kos. Starting with the second problem chapter, kos occur in results or variations. We apply principles to make the correct decisions involving ko types, numbers of excess local ko threats, the aspect of who captures a ko first and so on.

While reading the book, each reader will hit, and be forced to overcome, his current boundary. The book returns as much to the reader as he invests effort in solving the problems. With little input, he improves only a bit. With the most sincere practice, readers from 9 kyu to 4 dan can use the book to raise their skill of tactical reading for solving capturing races to 5 dan level. This is possible because the analyses of the problems are complete so that the reader can identify all his mistakes in overlooking mandatory variations or decision-making. Expect to read the book for at least two months.

Double digit kyus would find the book too difficult because a knowledge basic moves (such as throw-ins or snapbacks) is expected but trivial variations or obvious final moves are omitted. Problems beyond amateur level have been skipped.

The reader can practise visual imagination of the variations in the diagrams and texts. For the most complex problems, however, he might prefer to relay the variations on a board.

Some letter from A to H preceding every problem number indicates the difficulty. Discreet markup identifies subproblems. In a resulting basic semeai, its simple liberties are marked and a number states the remaining approach liberties of an eye. General principles carry bold font and text boxes contain quick major guidelines of how to solve difficult problems.

Dense annotation is the price for including thousands of text variations. For example, "Black A - B and C - D" abbreviates the two variations "Black A - White B and Black C - White D". The texts of the answers to the intermediate or advanced problems often begin with overviews on what variations to include and what decisions to make in tactical reading, and sometimes a reference to occurring techniques. Conclusions summarise the decision-making in detail.

Unless we reject the effort of practising problems beyond our current level of rest or complain about too many difficult variations, we recognise that Capturing Races 2 - Tactical Problems carefully enforces tactical reading and thoroughly discusses the solutions to the problems. The book is not meant to keep readers lazy by only offering them easy problems. Instead, it provides challenges to overcome a reader's current level of skill at reading semeais.