Unless this is the first time youve been exposed to Go theory, youve probably read or heard proverbs along the lines of Dont use thickness to make territory, or Dont play near thickness. Nonetheless, despite such clear advice against it, this is one of the most common bad habits in this book, and one that is made  and made blatantly  by beginners and stronger players alike.

The player starts off by playing a sequence that gives his opponent solid territory in exchange for getting a wall or a similarly thick shape. Very often, this tradeoff is adequate, or even favorable. The player then wastes that thickness by playing moves to turn the area directly in front of his thickness into solid territory immediately, as in Diagram 1. 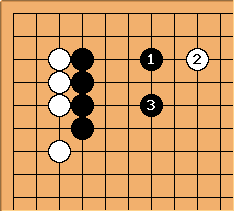 "I gave my opponent solid territory to get this thickness. If I dont get any territory out of it, hes going to be winning. I know that Im supposed to play far away from it, but the space in between looks so big. He could just play anywhere inside there, and then Id have to kill the invasion or be left with nothing. Therefore, I should play close enough that theres no way he can live or escape if he tries to invade."

If you play so close to your thickness that any invasion can be quickly and easily killed, you will never get as much territory out of it as you gave your opponent to get it in the first place. If you wanted immediate territory, you should have chosen a sequence that gave it to you, and left the opponent with thickness and the question of how to use it.

Its true that playing further away from your thickness might allow an invasion. However, it isnt true that an invasion, even an unreasonable one, needs to be killed. Chasing weak stones can be very profitable. You get to choose the direction to attack from, while your opponent can do nothing but run. With a bit of skill and forethought, you can ensure that your stones fill a double purpose  attacking while making territory or more thickness, helping out weak stones of your own, or destroying your opponents moyo  while his moves are nothing but a single-purpose scramble for life.

Seen that way, invasion starts to look like something you should welcome, rather than fear, and killing the invading stones begins to seem a bit like killing the goose that laid the golden eggs. When you come to this realisation, then you have begun to understand thickness.

Blacks position on the upper side is a little bit overconcentrated, but not too bad. Meanwhile, White has omitted an urgent move in the top left, at or around a. Before the sequence shown, Black is slightly better off.

approaches the lower right. There is nothing wrong with

, although a pincer would also have been playable.

The trouble begins with

. The most common joseki move in this position would be at b instead.

is dubious because it plays into a hane at the head of two stones (see Part IV: Bad Shape) and also induces W to start making territory on the fourth line (see Part III: Helping the Opponent). Still,

does make a very solid shape, so the moves up to

do not represent an insurmountable loss for Black.

, however, completely misses the point. White has taken more territory in this corner than Black and a higher position. Furthermore, if she later gets to approach at c, her position on the lower side will be very good. Meanwhile, Black's shape has little potential for further development.

, he should have aimed at encompassing the left side on a large scale, and extending his upper-side moyo into the center.

shows short-sightedness and pessimism  such moves will not win a game of Go.

The key, as mentioned above, is making Blacks position on the upper side work in conjunction with the thickness he has built at great expense in the lower left. The fact that White omitted extending from her corner in the upper left is also important.

here is a powerful move. In one blow, Whites upper left is sealed in, and now the center of the board, as well as the left and top sides, looks very promising for Black.

It may appear that White has plenty of room to invade on the left. Playing at a, for instance, might tempt most amateurs. However, Black b is a good attack  White will probably survive, but Black will have the opportunity to extend his upper-side moyo well into the middle of the board. White will have no chance to link up with the upper left, because Black c is sente, as it threatens to kill the corner.

Playing this way, Black has developed on a large scale. Despite his bad play in the lower left corner, the game is looking pretty good. 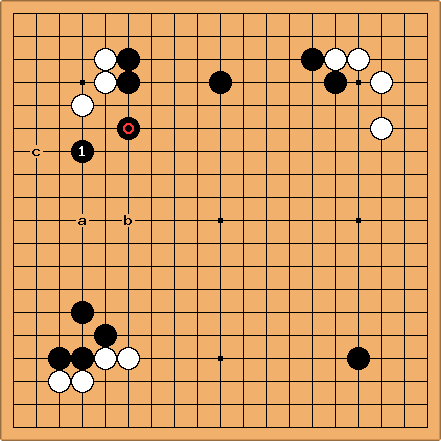 Both sides have made many mistakes, of course, but up until now, Blacks play has been much better than Whites. White first invaded the lower side and lived with bad shape and little territory. Next, she played the circled stones in the upper right, with Blacks responses also marked. Finally, she invaded the lower right and lived small again, in gote.

Despite a few potential weaknesses, Blacks thickness dominates the entire board. There should be a way to make the game miserable for White, but how?

is certainly not the way. It is precisely the sort of petty grab for territory that leaves professional teachers and stronger amateurs groaning at the wasted opportunity. The amount that Black secures in the middle with this move is around 20 points. Even if he seals White into the lower right, making another 20 or so on the right side, his whole-board total is not much better than Whites.

In the actual game, Whites next move was at a, a terrible move that allowed Black to use his thickness to attack and made

look somewhat reasonable. She should have played at b instead, aiming to reduce Black somewhere around the square-marked area. In that case, White would still have a chance. 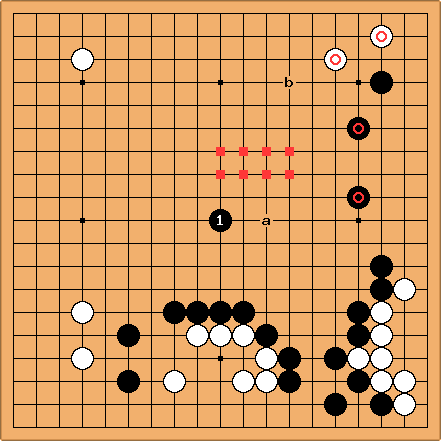 and the probable continuation to

. Such sequences are very common and seen in professional and amateur games alike.

and Blacks thick wall on the lower side act like two burly arms, trapping the entire center of the board in a bear hug. Unless she is extremely confident of her reading, White would be unwise to try to reduce any more deeply than a or thereabouts. Any further, and she could expect to face a murderous assault. Black can therefore plan on taking something like 50 points in the middle, or the equivalent in compensation if White attempts to invade. Furthermore,

aims at a good follow-up at b.

Had Black played this way, the game would have been hopeless for White. When you look at the size and power of Blacks moyo, its clear that when you have a thick position, you can afford to think big. 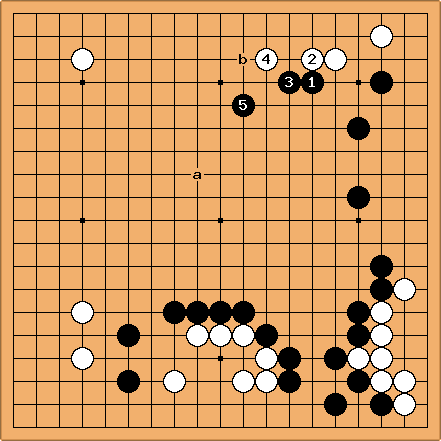 The only way to break this habit is to learn not to fear invasions. To do that, you need to stop thinking of the interior of your moyo or the space between a wall and its extension as your territory. Instead, you need to think of it as your zone of pain, your evil stronghold, the bait in your trap. Instead of thinking about preventing him from invading, you need to think about developing on a large enough scale that hes forced to invade. When he does so, hes stepping into a dragons cave and hes going to get burned. Not killed, mind you  youre a smarter dragon than that. Hes going to get chased all over the board, while territories spring up for you in places he didnt even know you had them.

Of course, that may be easier said than done. What makes this habit so common and so hard to shake is that successfully profiting by attacking an invasion is something that takes practice. The first 10 or 20 or 100 times someone dives in between your rock and a hard place, youll probably botch the attack completely. The wall that was supposed to be thick might even end up dying. Youll want to give up and go back to your safe, overconcentrated, territorial moves. Dont. Keep playing the large-scale moves, and youll learn something with each failed attack. You might lose more games in the short term, but eventually your attacking skills will improve and those wide open spaces will start looking narrower and narrower.

A good time to be conservative is when your opponent has some very strong groups in the vicinity, your thick group doesnt have any clear eyes (e.g. a straight line wall of stones) and you dont have much in the way of support nearby. In such a situation, an invasion might split you into two weak groups, putting you on the defense instead of the offense. In that case, it might be a good idea to hold back a few lines from where you would play if you were on your own turf.

The other reason to make territory in front of your thickness is if its really the only thing left to do. If you make a wide framework and your opponent never tries to invade or reduce (presumably because of the pounding he took the last time he tried), then you can play moves to make it solid territory, but only after theres nothing big elsewhere.