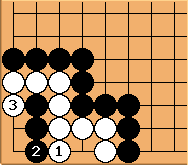 ChrisSchack: White first, I guess . . . the easy case. White lives in gote, one eye to none, with 9 points.

should be spared as a ko threat. 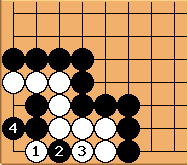 AdamMarquis: Since it is a beginner exercise, should this case not also be pointed out? Black's descent to the edge after White takes the throw-in makes it so that White can't approach. The result is seki (with a sending-two-returning-one option for White). 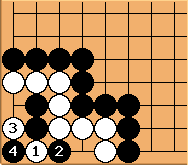 However, White can patch up by not taking

and make a ko - a bit risky though.

What if black takes

though? Won't black have killed white without ko? -Ned G.

Brent: Well, in that case it would simply be a ko that Black didn't fight. (= If Black captures

, then yes, Black wins the ko and kills White. But in compensation White gets to move twice somewhere else on the board -- once after

and once after Black captures

Bill: Don't be confused by the diagram. Black cannot take

below) without taking the ko. 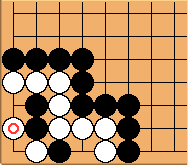 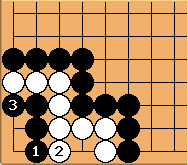 White just doesn't have the liberties needed anymore. (See next variant for

should wait, it's a big ko threat. 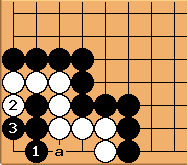 Confused: Here is the variant, White's still dead. White can't play at a because of a shortage of liberties. 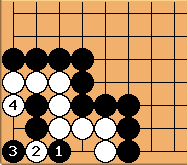 Robert Pauli: This nice seki results should Black start with hane, blindly following the proverb "the opponent's vital point is my vital point".