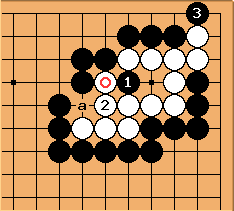 Threatening to capture a pivotal stone demolishes the eye that would have been formed by White playing at a. 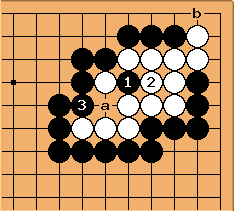 The points a and b are now miai to remove one eye from White's position. 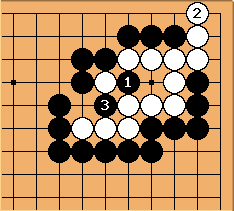 Ignoring the situation doesn't make it go away.

ProtoDeuteric- Would this be gote on white's part?
Mef: Only if white adds another stone and black doesn't respond.
ProtoDeuteric- Maybe I'm just not looking at this problem correctly. To me, black appears to concern itself with the possiblity for white to make eyes around the ponnukied stone. Would a more accurate interpretation be that

are miai, and that thus

is, in fact, a response to

?
Mef: Yes, white has 2 places to make an eye, so after white makes an eye with

, black destroys the other eye with

is a local response. 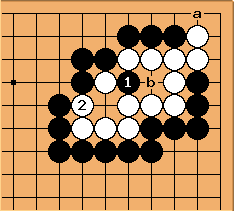 White's strongest resistance is to set up a ko at

and fight it. It's the only correct move for White.

Radvendii:I dont think this is correct. if black ignores

at "a " white fills and only has one eye. and even if black doesnt ignore and white wins the Ko she cant take anything of blacks so the only option is to fill. black then plays at "a".

is played at a, and

is played at b. Alternatively, suppose that the ko is played out, and White ignores a threat to play b. In either case, White would live. 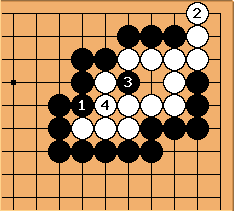 only destroys the eye on the outside, but

makes the eye in the corner.

are miai for living. 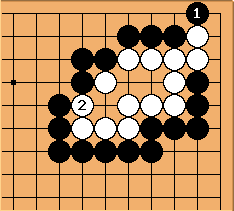