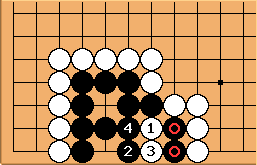 Black should make life as long as it's possible, even if it means losing the marked stones. 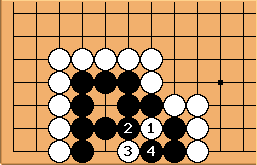 Should White play at

, the snapback will destroy Black's chance to make two eyes and the whole group dies.[1] 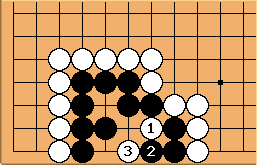 If Black plays atari at

, which also destroys any chance of a second eye. 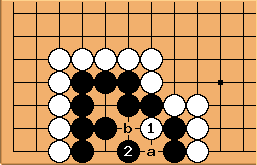 shouldnt black be able to live if he plays at

Tapir: Yes, this is the solution. It's essentially the same as the first diagram.

Anonymous: Question, given that you cannot take a stone that has just captured one of yours is not move 5 possible since 4 has just taken?

Answer: The rule is that if a single stone captures a single stone, that stone may not be taken back immediately. In the diagram 3 stones take a single stone at move 4, so those three stones may be captured on the next turn.