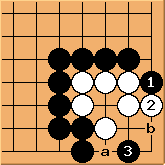 demetria: There is death in the hane. White responds to the incursion and Black takes the vital point. At that point a and b are miai for death (I think). Also, if White for some reason responds to

at a, then there's still a bulky-five shape. 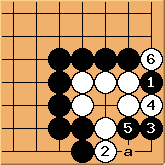 Common mistake: assuming your opponent will play passively to every move you make.

demetria: Why should Black play at 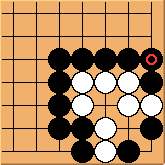 unkx80: I allow Black to add another stone at 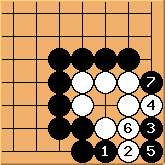 demetria: Would Black be able to ruin White's eye space so there's only one eye?

in the first try, then wouldn't Black effectively steal White's eye by playing at a? 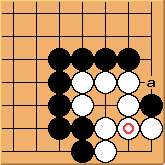 in the previous diagram is the

stone in this diagram. After capturing two black stones, does

at a make any sense now? 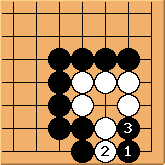 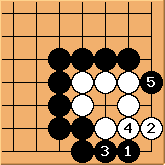 demetria: The {this is easy} solution doesn't work either. White still lives in a situation similar to the second diagram. 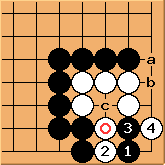 After White takes the vital point of the bulky five, there are to options for life at a and b (b being better, but Black can take it first.) Even if White loses a ko at a, White captures

to make a two-point eye.

under atari? Then Black at c will capture them. 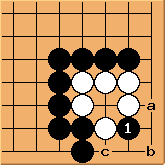 After going through all this it's staring to look like playing on the point of symetry is the only way to give White a false eye. No matter where White places a stone in answer, Black threatens to create a ko and the eye is either dead or false. 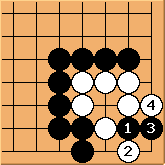 demetria: It's pretty bad that I still don't know an atari when I see one. It's a long road ahead ;)