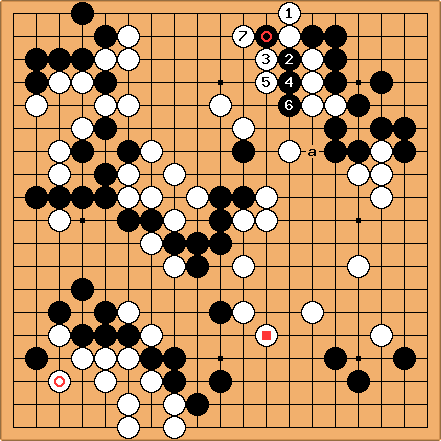 HolIgor: In the reply to Black's clamp with

I suggest for White the following variation. Black has to capture 4 stones, so White gets sente. The four stones are a great loss but otherwise White allow Black to leak inside the sphere of influence and yet have to defend. So, White has to endure a great loss in gote.

Charles Matthews I suppose this might be objectively best. Still, with

). Expressing that a different way, the miai value of Black's plays here was much higher than appeared on the surface.

Actually, that would be the lesson here: the endgame is difficult because counting isn't superficial, in the presence of tactics based on weak shape. You don't stop reading accurately just because the stage has been reached where you could count accurately. 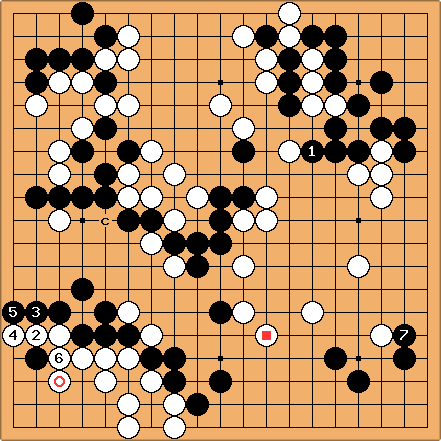 White needs a sente follow-up in the lower left, but

looks like gote. I think there is a kind of contradiction between

and all the aji in Black's left side territory: after

here the cut at c starts to look less evil for Black, not more so? Black probably plays

as an ultra-thick move to make White depressed; and if White is numerate she will probably feel like going home. Securing one way in to the centre with

) ways in for Black. 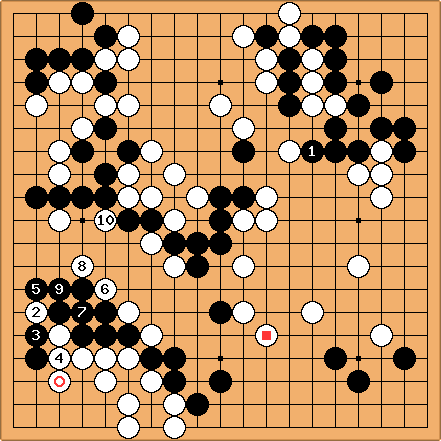 If the cut at 10 is indeed an issue, we should take a look at this option for white, aiming at it directly. - Andre Engels

Yes, this is worth reading out carefully. But, supposing it doesn't work (as we have all been assuming in the game), White ought to play some moves later here to take advantage of semedori tactics. So everyone is (I hope) currently afraid of some aji keshi in here. I find this all very difficult: if I had been on the black team in the rengo, I don't think I could have accepted such shape. (I know, a friendly game, but really this involves morality.) - Charles 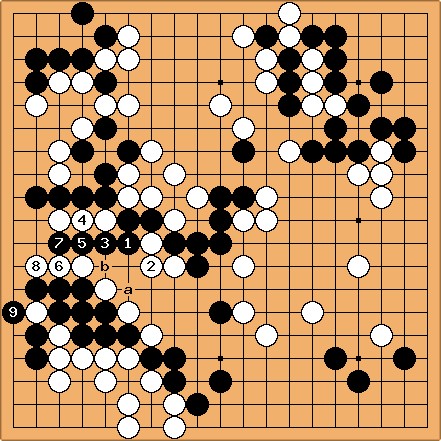 It looks like it does not work though, after the moves in this diagram white loses the fight. However, black will have to watch out - if he plays the double atari at a instead of

, he is tricked and loses four stones, for example. - Andre Engels 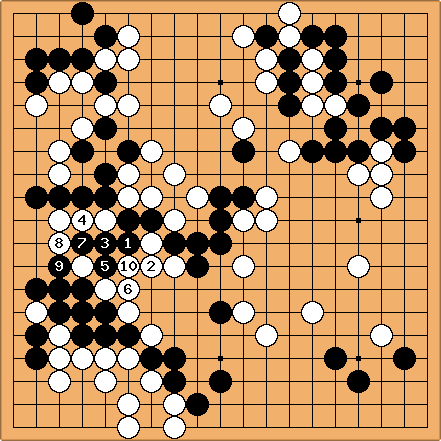 Just to show how easily one goes wrong here... In the above diagram, I made a mistake: if white plays

, she captures the stones. To avoid this black has to play the atari at 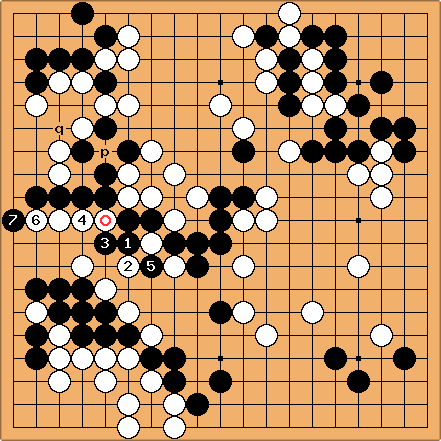 Charles It probably isn't interesting for White to connect at

is one more play to look at. It seems

wins. The liberty at p might be important later. Black can normally gain a liberty by playing at q, also.