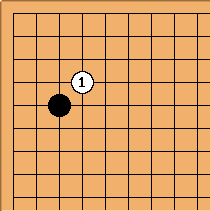 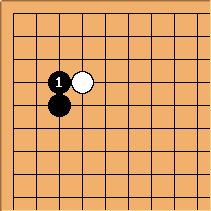 This very simple response assures black of a great local result. He gets territory in the corner, and white's influence doesn't look very impressive. Of course, if white is REALLY strong on the top this might be okay, however it is definitely NOT joseki. 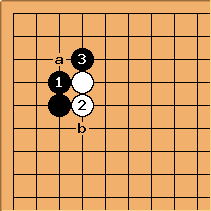 BobWhoosta: I wouldn't consider this joseki, black is definitely better. He gets the hane at the head of two stones, so imo this is a better result for black. I don't know which joseki you are referring to, which may be why I'm confused. Can you map out the entire joseki so we can see what you mean??

fractic: Actually it's a very famous joseki, the avalanche joseki to be precise. However

at b looks good for Black. 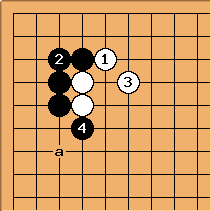 BobWhoosta: You can see in the possible continuation that black gets to hane on both sides of white's formation if White protects the cut with

. Black has territory, white's influence is a lot less.

. After Black a White can extend along the top or play at 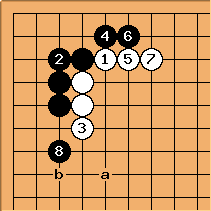 Black's corner is huge, and he's peeping out on both sides. Where is the good variation for white??

fractic: White can continue with the a-b exchange. This is joseki it might look better for Black but remember that Black has played a stone more here.