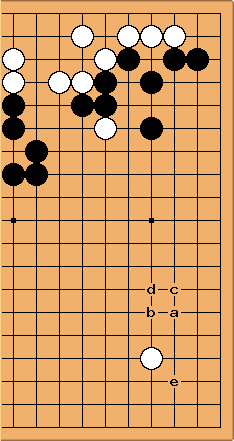 iago: Hello, this is from a game i played on kgs, with black. at some point i considered approaching the lower right corner. but couldnt find a correct move, here is what I was thinking.

for some reason i want to approach from a, b, c or d. it seemed during the game that approaching from the other side was wrong (bottom was not very interesting) so i wanted to make a huge moyo on the right. perhaps this was my problem but well :)

Bill: How about showing us the whole board? That may help. (OTOH, we may still not know what's best. ;-)) BTW, if an approach from the bottom side is wrong, e may be a possibility, too.

iago: thx bill, well first about this whole board thing, i could, but i made some arrangements, this is not the actual game. in fact, this kind of problems (what extension to choose) happens to me a lot right now, along with my other problem : what to do when my opponent is about to get two walls facing each others. maybe i will write a BQM for this one next. anyway the game is on kgs if you really want to look at it. Second, e is the kind of thing i didnt think about, let me see if I understand ? 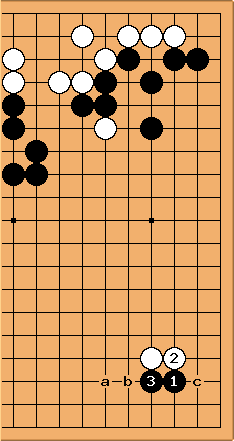 so i think white would usually blocks with

, but since the bottom is not interesting, she goes with 2. a, b or c are next, but basically the idea is black traded his moyo on the side for a solid corner and the assurance that white wouldnt make much out of her wall. correct ? 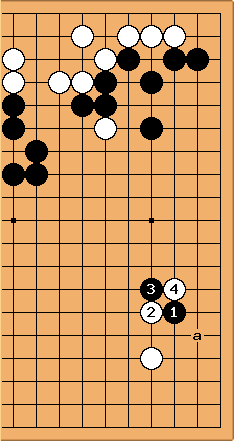 if i use the standard low kakari approach, white can play the tsuke and sacrifice, thus flattening my moyo, and overconcentrating black a little. so i dissmissed it.

Bill: Thickness was made for fighting, and here White starts a fight. What's not to love? (How about a, next?) As for overconcentration, a 5 space gap is not so bad.

iago: uhm... so maybe i am trying to hard. or maybe i was too focused on this moyo idea and need to be a little more flexible. interesting. 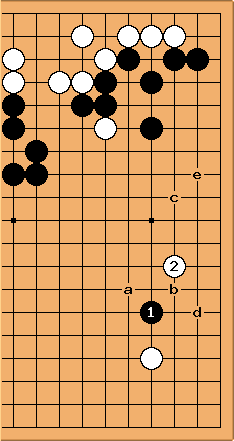 in order to prevent being flattened, giving more of the corner to build a huge border. makes sense... except white played

, and i was at a loss to respond. correct shape would be to play black a, but then it seemed that white could settle easily with c. so I played b instead which as you can imagine didn't go well.

Bill: d comes to mind. After White extends to c he is eminently attackable. e is one possibility to knock White's socks off.

Iago: wow. very nice move. i think i got my answer right here. 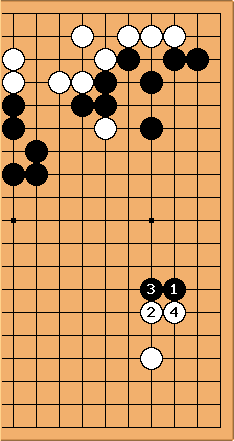 so... well obviously i am missing something. i would appreciate your input

Iago : addon, just to be complete : 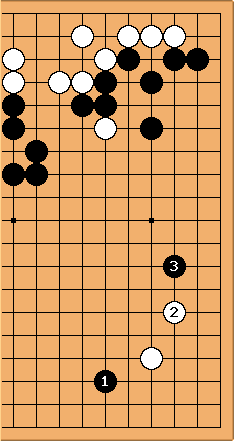 this is what i meant by playing from the other side. maybe it was best, but i dunno

Bill: Maybe it was. It's hard to say. How about showing us the whole board?

In such a situation a little overconcentration is all right, faute de mieux. A fight which produces thickness facing thickness is not a bad way to end up with territory.

One plan is to make a large framework, enticing an invasion, which you attack. In the game, White made an immediate invasion in the form of a pincer. It seems that the attack did not go well, but the plan was sound.

Another plan is to make territory in the bottom right corner, leaving White's thickness facing Black's. If you can invade with sente, so much the better. Then a play on the right side may limit the utility of the opponent's thickness, but be less than ideal in relation to one's own.

Aside from the question of the exact point to play, assessing these different plans, none of which is ideal, requires good whole board judgement.