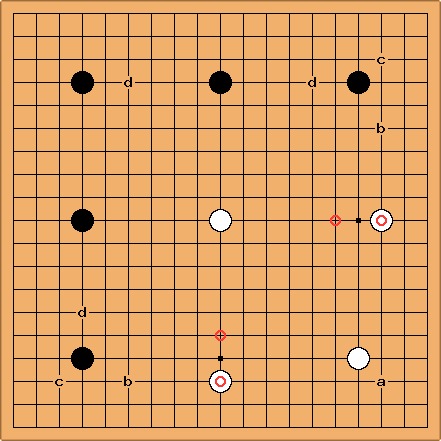 In my games I often get this kind of position. I know it's not actually a shape, I really have no idea what it is called.

I would like to know if White has better chances to win that way, and where should he play if the game begins like this.

Charles Compare for example with the four star points box formation. Here the

stones are on the third line. That means that Black can cap at the circled points.

[1] About the continutations, W may decide to play at b or d. The point c 3-3invasion is an option too later on.

About the comments of W's opening shape, B seems to achieve more than W **in theory** in my viewpoint.

B influentially occupies 3 corners and the whole of 2 sides (upper and left).

B plays all stones in the fourth line. B makes two 3-star openings which is a super framework.

W plays 2 stones in the third line. So W's territories are a bit secure. However W should be framework oriented, and these 2 stones seem not to fit well with 2 stones at star point and the central point (tengen). So the 2 W stones don't fit well to help with speedy development (a capping problem).

The possibility of 3-3 invasion is a problem to W too. I feel it is better if 3-3 invasion disappears in W's opening shape. It is because it is harder for W to make better use of the wall than if B does.

I don't like to W if I were W. But it doesn't mean the end of the day. W can win. It depends on player strength and their style. And maybe you can find the good points about this shape that I don't see.

TDerz No one has replied yet to the question where white should/could play now.

aLegendWai: It's me. I did it previously (although extremely short) [1]

After all there are 5 Black stones and 4 White stones - normally one of those b's I guess. Yet I find White is behind now and should pull off something more spectacular. The white Tengen should not only serve as marker for the borderline of your moyo - Go is not so easy. If it was, Black had won already, because he controls more area (W10x10 + W sente (ok) < B(3x19+3x15)). No, the W Tengen should serve a 2nd purpose as fighting stone I guess. Rumble a bit with not-so-standard book moves in Black's position.

Generally spoken, white does not seem to have followed the general principle or fundamental of corners first, side 2nd, center last. That is in my view the reason for a disadvantage.
Although we should play our own game - its necessary to do so within the fundamentals - even Takemiya does.

Black can enter at 3-3 a, which is normally not at all bad, rather just an exchange of corner against wall.
But then White here only has 1 quarter of the board in control, which can be easily reduced. This strategy has the disadvantage that "all eggs are in one basket" , this lower right moyo. White can destroy/reduce something of either san-ren-sei, but not both.
The disadvantage of the 3rd line points k3 and r10 has already be mentioned - they can be capped. If playing for moyo, just make it bigger and bigger until the other one invades - then attack. Playing on the 3rd line (instead of side hoshis k4, q10) tells me that White wants to go for actual territory instead.
So the capping plays on the 5th line (more realistic, one of them) will precede the 3-3 invasion. White has not much left over.
I prefer Black in this fuseki position.

aLegendWai: I couldn't agree with you more. :) I like black in this position too.

I would suggest the following. 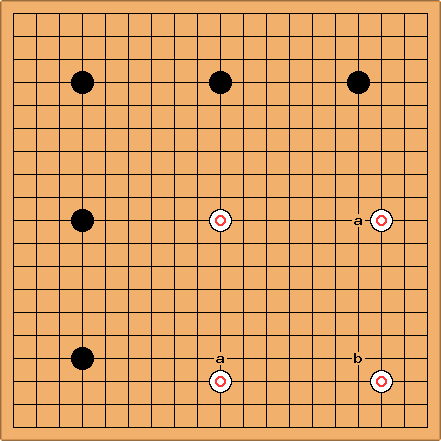 stones co-operate well. In this shape any invasion on the side (bottom and right) is more difficult due to the enclosure of 3-3 weakness. W can invade freely without worrying its base too much.

You may consider playing 2 stones at a (I prefer this). You know, the corner is the easiest to live. So it is still difficult for B to invade here. B may probably invade at 4-4 if it decides to invade. But the invasion stones will be floating (they don't have the base!) They have to escape. The central point and two star-point stones will work well to chase after B tightly. Although it is very likely that B can escape finally, it doesn't mean a failure, you may build good influence and stregthen your base during the attack. It in turn helps you to attack B's base.

You may consider occupy 1 more corner first before occupying the central point. B will usually not occupy the central point, so it is likely for W to occupy here even if it doesn't play here so early. W can do so especially when W manages to get sente after the end of first joseki fight.

Bill: The 6-space extensions from the 3-3 stone are too far away. Black can easily destroy White's framework.