I've been working on being able to play a moyo game, so that's really the focus of this opening. Here I took black. 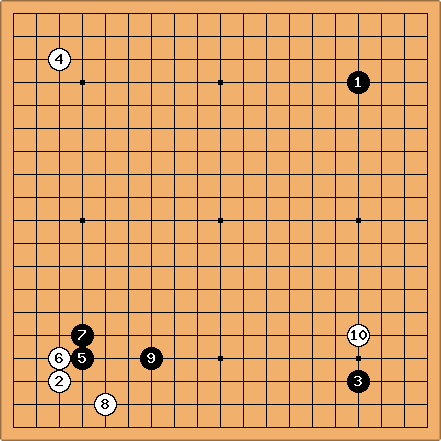 Imagist: I had planned to play the High Chinese opening, but white's double sansan gave me the opportunity to try a full-board moyo with 3. Up to

I thought I was doing well, but

Krit: pincer as the next move is more interesting if you treat the 5 and 7 stones lightly, I think it's possible to still make a chinese with 9 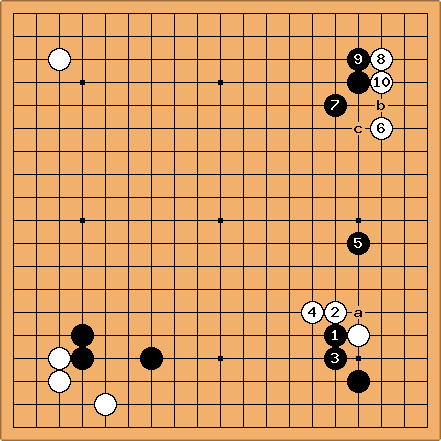 here to build thickness toward the left side, but white again made things difficult with

. The cut at a would give me territory, but would be inconsistent with my strategy thus far, so I chose this

to keep white weak while creating a moyo, keeping a in reserve.

I wanted to answer

at b, but after c my

stone would be under attack, so I chose Takemiya's kosumi for

here because it builds influence in a direction where the potential territory is already undermined. If White just plays the hanging connection with 4 he's disrupted your whole-board moyo without creating a weak group or giving away too much territory. If you want to play a moyo you could try

as an immediate pincer.

and the bottom right White group, both of which could come under attack. 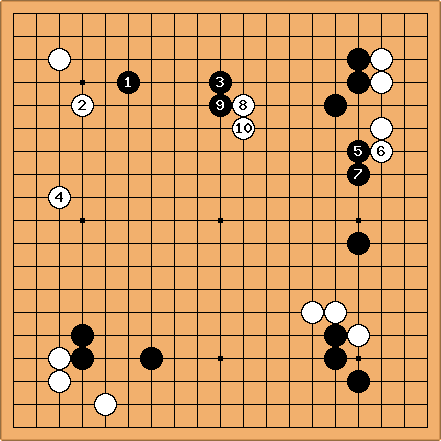 Imagist: I judged that playing

directly would be too slow, so I played

before going back to

, my moyo along the top was developing nicely, so white reduced at

to secure my connection with 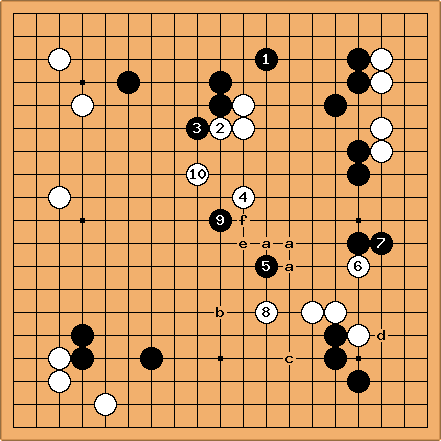 Imagist: I reconnected with

, then began an attack with

. After a long deliberation I chose the splitting attack at

. Any of the points marked a seemed reasonable for this move, so I wasn't at all sure of myself here.

didn't seem to help white any, but

caught me by surprise. To my eye

makes a sort of miai of b and c, so white can get out easily, and also puts pressure on

. I could stabilize my bottom right corner with c or d, so I decided that b was bigger to play now than c, but first I had to try to settle

. I decided that attacking white's center group with

would be the best way to do this, since 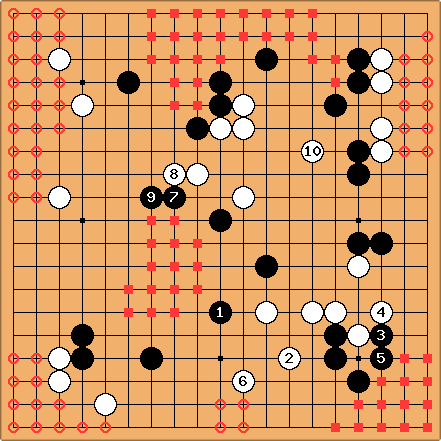 Imagist: I felt like if I could solidify my territory in the center bottom left and gain about as much of the unclaimed parts of the board as white, I would win (using the guesstimated points marked) but

started a series of attacks that lost me the game. 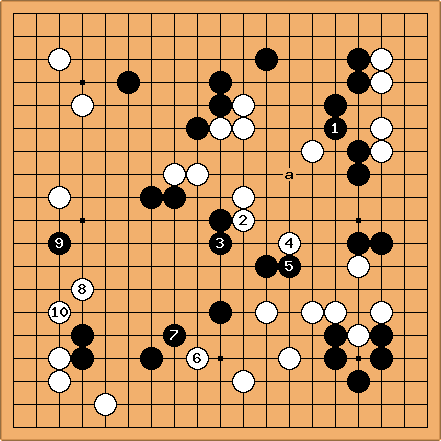 was the beginning of the end. I resigned after failing to kill white's center group.

Andy Pierce: Here's an idea: I think your counting is part of the problem. As seen from the last position, white's territory on the bottom, in the center and in the lower left was larger than it appeared. If you had counted and decided you were losing, would you have played differently and if so, what would you have done instead?

JG: Andy is right. In particular,

are much too submissive. The four black stones on the right side can easily connect above or below, or live independently.

in the diagram is left on a dame point. I would play

around a in the diagram, and challenge white to cut and be captured, or to be driven through the center of the board.

Similarly, I would use

to push or jump into some white territory. Doing that is often more efficient than defending one's own center territory.

Please do not take this too seriously, since I am weaker than Imagist. With thanks to Imagist for posting these games. They provide useful study material for other kyu players.