About The Value of the First Move

To play, or not to play?

In Go, the placing of a stone is an important part of playing the game. Players have the ability to "pass"... however, the indication of "winning" and "losing" is only apparent if there are go stones on the board. A move has the potential to influence every other position on the board. The evaluation of this potential is dependent on:

(These are the main ideas behind all the terminology used in Go) The fact that stones can be added anywhere on the board (except for where other Go stones already exist or suicide moves with no purpose), combined with the sheer size of the Go board; means that according to combinatorics, there are a huge Number of Possible Go Games. If the purpose of the Game of Go is to "win", then every possible combination of events on a Go board is filled with "bad moves" and "illogical sequences". "Perfect Play" is a theoretical idea (according to a set of rules) which predicts either a win or at worst a tie, irrispective of the moves played by the opponent. "Perfect Play" has a complete command over every single possible game where all the moves made are the highest value possible with no uncertainty. For perfect play to be used in a situation, it must be possible to win or tie if the opponent attempts "almost perfect play" (for some non-go games, simply going first can result in losing the game with two player perfect play e.g:21 matchstick challenge).

The 21 matchstick challenge is a young children's game where the "winner" is the person to take the last matchstick. The rules are simple: Simply take either one or two matches from the stack -- then it's the opponents turn.

The calculation required for the various lines of "Perfect Play" using "tree search" evaluation is immense. Human beings are limited creatures, so there is a fair deal of LuckInGo... but humans tend to play quite well (although not perfect). This is because (instead of reading every single sequence combination) most of the time, mental tools and logical shortcuts are applicable to a greater number of situations. The purpose of this page is to describe different ways of thinking about how to evaluate a go move. Varied techniques are encouraged to be shared here...

A long game starts with a single move

The first move on the board by Black sees a total of 55 possible opening plays (eliminating differences in rotation and transposition). 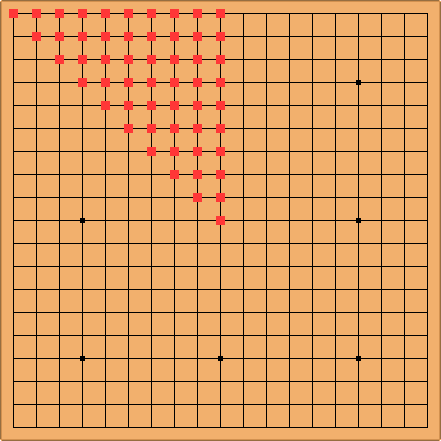 + The first move gains an unchallenged board position.

+ The starting player is always either equal to White in moves played or one ahead. (Making objectives slightly easier with balanced play)

? It presents the start of the game for the second player.

- The first player reveals his/her goals and strategy first. Depending on Black's choice of move, White has a varied number of responses (eliminating differences in rotation and transposition). A Black tengen play maintains symmetry throughout the board. 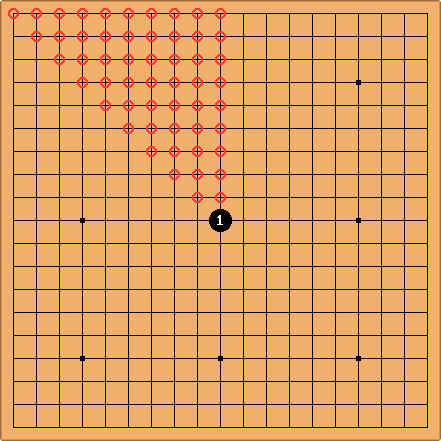 ? White stone is closer to the edge of the board than the Black stone

- White has less possible choices of moves than Black had. If Black plays on a diagonal or vertical/horizontal point of symmetry, half the board is still the mirror image of the other half. 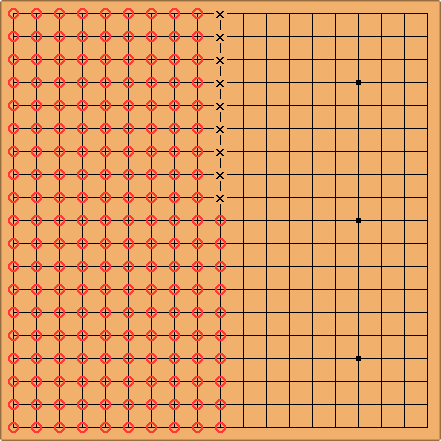 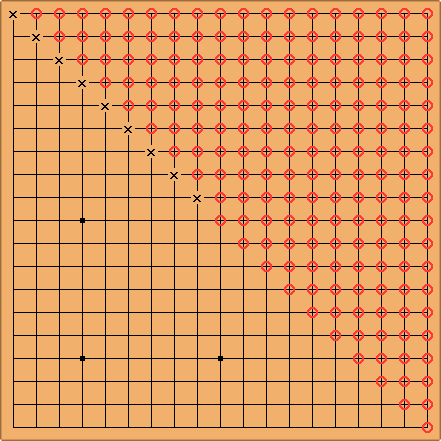 The remaining Black options create an instant asymetrical relationship with the board. 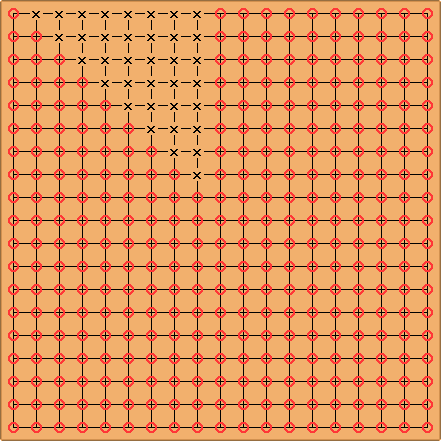 The 3rd move has a maximum of 359 different positions. No stone is able to be captured until this move. Absolute symmetry is broken for the moment due to the fact that the White and the Black stone aren't the same colour...

The biased see-saw of advantage/disadvantage of Black's first move decreases its overall influence as more stones are added to the board. Every single move during the game was ever so slightly biased by Black's greater command play by play. How can this advantage be used? The efficiency of joseki and fuseki is determined by subtle placement of stones on the board (eg: ladder breakers or weaknesses in shape or bad aji through opponents sacrificed stones). A change in the placement of a single stone (even to an adjacent intersection) can have profound consequences. In the mid-to early game, it is argued that having a pre-defined inflexible plan of attack leaves your position biased in achieving your goal. The resulting shapes your stones make will likely be overconcentrated, or you may find that your plans are spoilt by being too obvious (eg: having your intended moyo space invaded by extending opponent stones that live easily).

With this knowledge, there are two different stratagems: 1) Black needs to know the right way to give White good moves that let Black keep an ever slight decreasing advantage of having played an extra stone. Black is still able to dictate the feel of the game (i.e: a fighting game or a moyo game), yet the flow of where groups are and where territory is made, stays like a balanced dance between the two players. To play like this, you really need to know exactly what you are doing and how to use advanced fuseki to pick out the best line of play. To excel at this, you need to be able to master all styles of play to choose the feel of the game that your opponent has the most trouble against. (Planning before the game according to their personality) 2) With positions mostly safe and equality found all around the board, Black can put the question of what patterns the board will take by playing a move that lets White take the inititave with a (White) influential play. Black plays a move that is safe, and good, but a little bit slow. Seeing that the board was already balanced, Black is betting that having the move advantage won't bring an overall board advantage... seeing that Black can simply correctly respond to White's designs. It is also worth mentioning that despite Black's slow move being a "territory grab", there is still a latent ever slight increase of influence because of it being there (despite it not contributing to the grand scheme of the game).

Komi is the artificial compensation White receives for playing second. But is it really indicative of the advantage Black gains by going first? As soon as a quantitative goal is required, Black needs to concentrate on defeating both the opponent and the go board. All sequences of play are pitted against the komi required to win. Black must reject potential conflicts that squander this first move advantage without adequate compensation. White knows this, and seeks out to take advantage of any Black unbalanced moves.

A study in relation to joseki 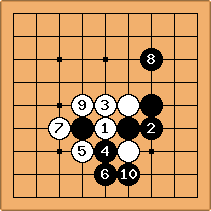 Pictured to the left is an example of one of the many continuations of the taisha joseki played out on a 9x9 board.

With black 10, the joseki is finished, with white to play to next move. Since each move has been proportional to the opposing players previous move, the groups that have been formed are, thusly, proportional to one another.

So, what does this mean? Well, if joseki is any indication of proportional moves, then this game should be able to proceed from this position to a fairly even end result.

Have a try yourself! Oh, and don't forget to add Komi for white ;)