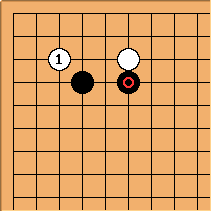 Suppose White invades in answer to

It also was seen in the recent game O Rissei-Alexandre Dinerchtein (B). 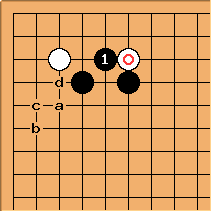 It is expected that Black will play

, as in that game, for the sake of good shape.

Now the game from 1995 had White next at a. What was played by Dinerstein was the move at b (which he said in his commentary had been played by Yi Ch'ang-ho against Hane Naoki).

Clearly what happens next depends very much on the adjacent side positions.

c and d have also been played by professionals in this position. However, there are too few games, and too early differences between them for me to call anything a joseki. - Andre Engels

Andy Pierce: I recently got a good result playing this as white in a handicap game. By attaching, black wanted to settle the position early and put a good chunk of territory in the bank. I invaded at 3-3 primarily to deny black his intent and give him something unexpected to think about. I also found the residual aji of

to be useful, although I never actually tried to move this stone.