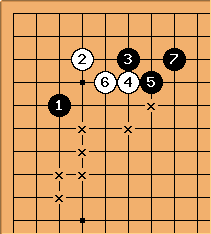 leans against the pincer

, and as is usually when leaning against a position, black is strengthened at the top, giving white the possibility to put pressure on the left side stone. White will often play tenuki though. If white does play next, either immediately or later, any of the moves marked x is possible. 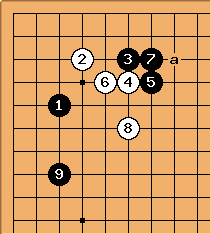 The solid connection at

is similar to a, also in its continuations. 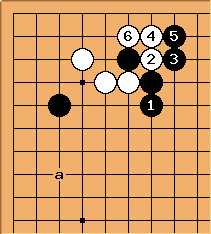 creates a wall toward the top. The wall is not very strong, though. The choice depends on black's position in the top right. White settles herself by capturing the original pincer. Black can continue at a, but tenuki is more common. 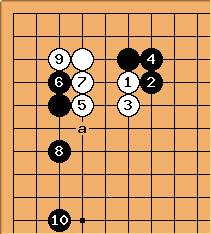 is another possibility. The solid connection of

is one possibility. White needs to play

are forced. If black plays

at a instead, which looks natural, he cannot get a good result after 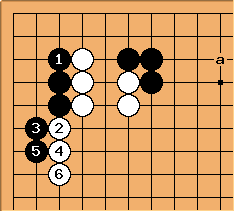 Black can also take the corner with

. White can push black down with

or pincer the black group with a move around a, depending on the upper right. 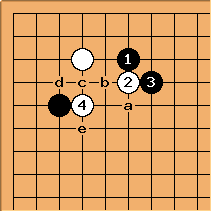 The double attachment at

may look strange, but is a viable way of playing, although it is hardly played recently. Black a-white b and black b-white c are both bad for black, so black only has only d and e to choose from. 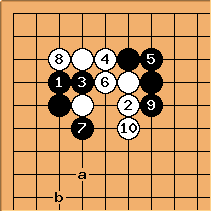 both take a vital point, and the sequence to

is an established joseki. After

black extends to a or b. Black has played at both sides, but his group at the top is not very solid, and white has been able to play 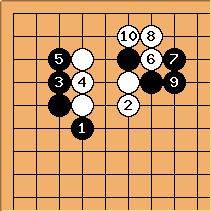 . White can convert to the previous variation by playing

, but if she connects at

is to be expected. 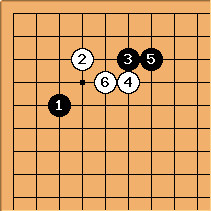 intends not to give white any possibilities, but black himself does not have much either. After

, black defends one side and white attacks on the other, but a specific joseki cannot be given. 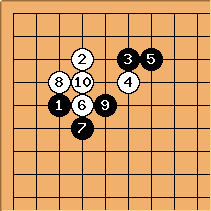 Like before, white can play the double attachment at

. Again no specific joseki can be given after 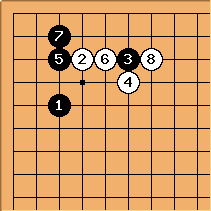 . It does however feel contradictory to

, which was aggressive and directed to the top.