is a normal response.

however is not normal, this move is normally played at a.

is the only move, after which black plays

, black is trying to trick white.

The normal continuation for white is to play a. White b is a mistake which will result in a bad position (See variations under 'White atari').

After white extends with

. Alternatively, black can try to brew up trouble by playing c (See variations under 'White descends, black hane up')

The correct way to play for white is to give atari at a (see 3-4 point high approach low extension), but many players will be tempted to cut at b. This is a mistake.

Dieter: I have reviewed this "trick play" with Lizzie (Leela Zero and Katago). Both engines prefer this variation over the "correct" variation.

After this sequence, may players will feel satisfied that they have captured the marked stone

. In reality, they have been tricked.

One way for black to continue is to play like this. White gets only 4 or 5 points in the corner, while her marked stones (

) are cut off. Black is strong on both sides, so this result is terrible for white.

Dieter: AI prefer this variation, getting the corner in sente and the aji of the marked stones.

Black can also continue with

. This sets up another trick because the corner is not 100% alive yet. If, for example, white considers the corner alive and plays

. Black can kill the corner.

Herman: @Dieter, how does AI feel about this? Extending is, IMO, the main line for black. The atari in the previous diagram feels like a thank you move.

, white cannot play at a due to shortage of liberties

Considering the above, white should play 1 to defend the corner. Now the p-q-r threat is gone, because the white capture at s then creates 2 liberties (r, t) instead of damezumari.

Herman: @Dieter: Specifically, this is considered the "correct" continuation after extending and now black gets sente (or he can use it to spend a move to encircle white's central stones)
The classification of above as "trick" or "obvious threat" is in the eye of the beholder. 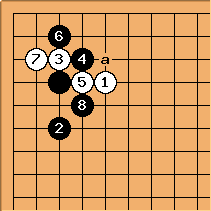 , the players are in for a complicated fight. White can avoid that fight by playing a, but playing a comprises a small loss for white.

Herman Hiddema: I will expand on this at a later time. For now, see the discussion at BQM186 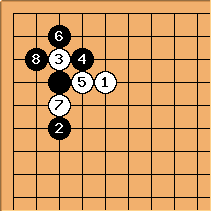 The white atari at 7 is a mistake. Black captures with 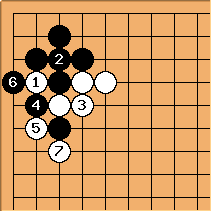 After black captures the stone at 3-3, white can only give atari with

, after which black cuts with

, white sacrifices another stone and sets up a ladder. If the ladder is bad for white, this is a disaster, but even if it is good, black is very happy. Black gets a big corner in sente and can look forward to play a ladder breaker later on. 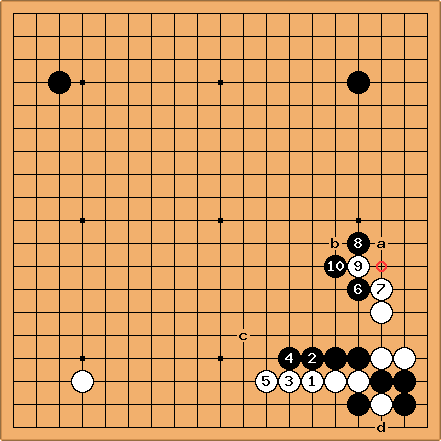 When White extends with

connects at the circled point, Katago sees possible continuations at a, b or c, still not thinking about living in the corner.

Herman: Interesting. Killing the corner is a 20 point swing, but apparently the outside is bigger than that. Thanks for the insight! 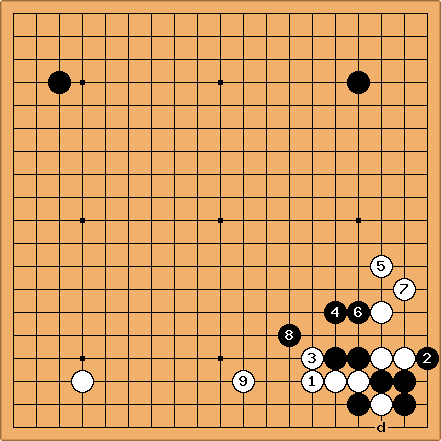 is estimated as ~22% inferior by Katago.