Anonymous: Here is a sequence for the 3-4 high approach kick.

After the high approach

. This is locally a weak move, because

is on the vital point of the black kosumi. Such a move is also called a weak player's diagonal Therefore, if there are no stones nearby, this is bad for black.

is a possible followup, after which the situation is identical to the one where white plays a low approach at

, followed by the kosumi-tsuke of

and a white extension to

show one possible followup from that situation.

is an extremely unusual move, which is basically only played in special circumstances. In those rare cases where professionals played the

exchange in an empty corner (so without any special circumstances)

is never played as a followup at all by professionals.

Note that after the

exchange, the situation basically reverts to a 3-4 low approach with kick

Bill: I wouldn't call it a joseki, either. Nor would I call it a kick. It's a diagonal play.

Dieter: I would like to elaborate on this from a shape, or haengma perspective.

First thing to notice is that the

exchange results in a weak diagonal. See that page or haengma tutorial for beginners to understand the imperfect properties of a diagonal in general, and its disadvantage in particular when smashed against a straight connection. To play such a move means we are dealing with special circumstances.

exchange, the keima is awkward in itself:

The natural cut through the keima is a severe potential for Black.

MrTenuki (Warning: KGS 3k speculation): If black mis-handles the cut, the result could be potentially better for white:

For example, this could happen-- Black ends in gote.

Herman Hiddema: This is good for white, and is the reason the double hane is bad for black.

But what happens if Black plays this way?

White crawls on the second line.

Herman Hiddema: In this position, a is the key point, and black should play there after

. Which means white should play there first. See next diagram. 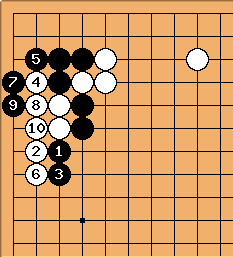 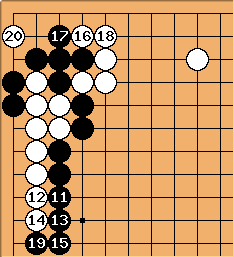 Herman Hiddema: Like this, white captures the corner stones.

MrTenuki: All right, here's the revised diagram. The question now is whether black can afford to ensure that white crawls on the second line while still making the corner live (possible L group?)

Of course, surrounding stones could change the situation-- I guess this is part of the reason that some people play

in the first diagram a line lower, so that there is less bad aji in the position. The result would be black getting sente at a cost: 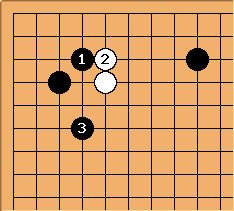 Velobici: Black can play this way when

cause White to be heavy in this area. Otherwise its not good for Black.

Bill: And how often is White going to oblige with

This is a known result with GoBase showing 35 hits for this pattern. Comparing this diagram to the original diagram at the top of the page, we see that Black has played an additional stone at

and the Black stone is at the location marked by a square rather than at a.

Tapir: By chance I saw exactly the corner position discussed on this page in a professional game today... (random on 361points, so i don't remember) with colors reversed. However, there was a white stone on the left edge which was (together with the lower left corner) more threatening so black invaded there, which allowed white to defend the lone stone and the cut at the same time, taking profit on the upper left edge. (White won the game, btw.) - I guess, most often the diagonal play is played after a low approach answered by kosumi or keima to take the corner - often with a considerable time interval in between. Most examples I have seen where the diagonal play is played against the high approach featured a stone denying the extension.