Although the joseki are documented here, I didn't really remember them when I was playing in our tournament yesterday. 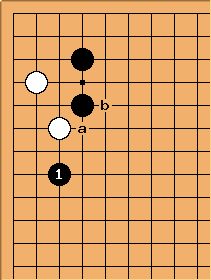 , I had to rely on my positional skills and technique to find the answer, which is actually what one should do, even if one knows the joseki. Since the upper right contained a strong Black position, I didn't want to push Black with a then b. I came up with the following. 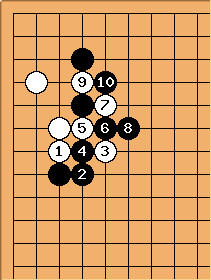 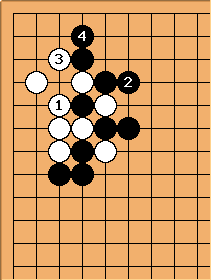 Well, as it turned out, Black had a concrete wall facing his strong position in the upper right, and facing his hoshi stone in the lower left. I couldn't be really happy with this but hadn't visualized it this far when I bumped with

in the previous diagram. That's probably one thing I should do to improve. It's pretty straightforward and the evaluation is not too hard.

My opponent, an anonymous strong player, told me this was all joseki so I felt quite proud that at least my moves were locally correct.[1] He added that he plays this often and mostly chooses

in the last diagram over the atari that gives rise to the squeeze variation.

However, he must have been mixing up what we did with the high pincer variation. I did a search on gobase and as far as the pros are concerned, my bump doesn't exist.

Well, this isn't really a question anymore. I realize now why the bump is bad and why White gets out with the pushing move I resented. Still, you are welcome to add your thoughts and experiences. 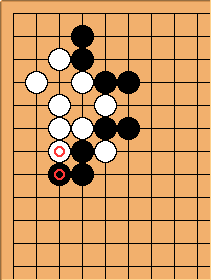 Having taken a closer look at the joseki, I think this position must be playable without the exchange of the marked stones: that's the high pincer variation where Black avoids the squeeze. Obviously the marked exchange I made in the game, not chronologically though, is a bad one.

HolIgor: I've seen the initial position in many games of the top pro. Yi Ch'ang-ho and Yu Ch'ang-hyeok played it quite often. Black always obtains heavy influence here and since it usually starts with the Kobayashi fuseki, Black's framework becomes scary. Yet they invade it without fear. Actually, what I would like to understand is the technique of those invasions.

Charles But that's an odd comment. This is a transposition into a joseki for the one-space high pincer, with White having made a loss-making exchange as price.

Dieter: Indeed, that's what I said above. I lost that pride as soon as I realized that.

Charles Yes, this is indeed what Dieter wrote in the sequel ... I got a bit distracted checking what our SL reference page 3-4 point distant low approach, shoulderhit says about all this. Needs work: the first 'continuation' diagram above is something I learned from Guo Juan. Also, there is a well-hidden ko in the "main line". 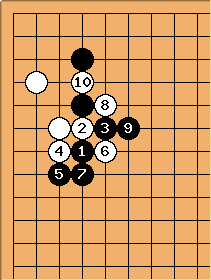 Bill: The play transposes to this variation with the new move,