This is the game between Ishida Yoshio (Black) and Fujisawa Shuko (White) in the 1971 Honinbo tournament. 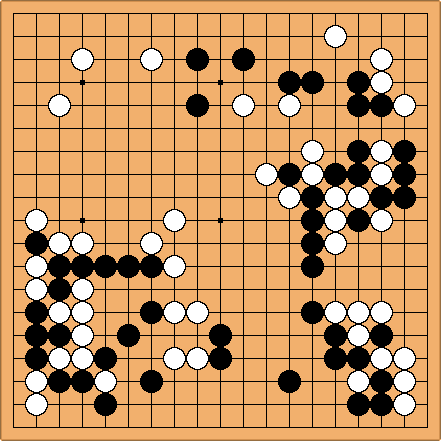 After 100 moves, we reach the basic position shown. Note that there is an unsettled capturing race between the black and white groups with three liberties each in the lower left.

This game has a commentary in the book The 1971 Honinbo Tournament. The commentary gives a number of variations from this point: 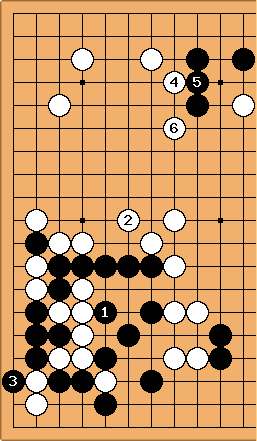 would give White over 60 points in the upper left and a sure victory'). 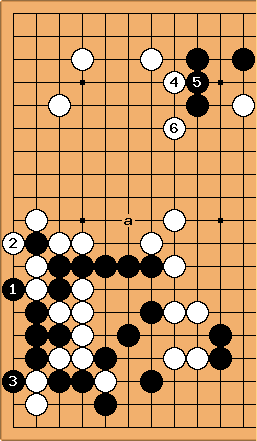 Then it gives this variation. Once White has captured at

, Black can no longer jump out at a, so this is the same. 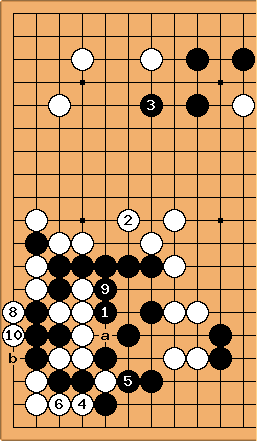 The commentary says that this diagram (where White connects his corner out in gote after a and b) is what ought to happen. 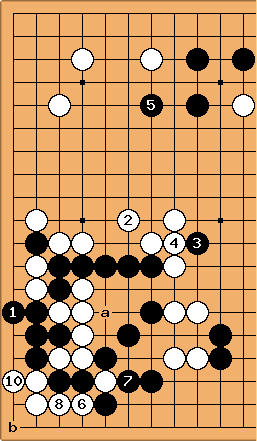 But in the actual game, Black plays this way (then fills a liberty at a and White lives with b). The commentary says that this is the same sort of result as variation 3, but five points better in the endgame for Black. 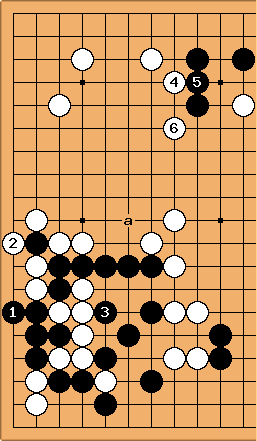 But what if White uses

to capture, as in variation 2? This threatens to win the semeai, so Black will have to answer, and again Black can't jump at a. So we get the same result as variation 2, which the commentary says is intolerable for Black.

Can anyone explain this puzzle for me? Why didn't Shuko play 2? -- Matthew Woodcraft

I can only guess at the motives of 9p's :-) However, most likely Shuko was worried about his center group. If he plays

, he knows that Black must answer with

in the game. It is true that Black can not play a in the puzzle once White seals off the upper left corner. However, if Black plays

then he can play a as well as part of the attack on the center. The stone at a can be cut off from the bottom but it can connect to the stones on the upper side instead. As noted in the book, Black seemed to be behind at this point so probably Shuko was trying to find the safest course of action. Locally

might be the best but still not be the choice from the whole-board point of view. -- Dave Sigaty 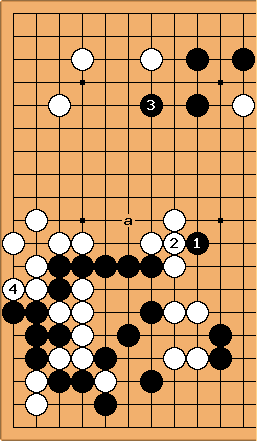 Do you mean the continuation would be like this? By my count, White has gained something like 25 points in the corner, compared to the game continuation, so he ought to be able to treat the centre group considerably more lightly. Is Black's aji around a really going to be enough to make up the loss in the corner? -- Matthew Woodcraft

Dave Sigaty: I don't know what the continuation would have been. The position in the center is beyond my ability to assess with confidence in order to say what two of the strongest players of their day would have done. I fully understand your point and given the explanation contained in the book, you raise a very interesting question. Considering that Shuko did not take the stone and that the commentary by the pros did not remark on this, I have to think there is more to the position than the commentary implies. This means that the real point of study here is how to attack in the center. That is a very hard, very advanced subject in my opinion.

If you check What Is Your Favorite Go Book, you will see that this book is mine. It was the very first book about Go that I encountered and directly led to my continuing interest in the game. I continued to play through this book for pleasure while I was learning the basic rules and concepts. I still remember the thrill I felt when one day I "understood" that Rin's big dragon in game 5 was dead (Chapter 13, figure 11). I could see, without having to lay out the stones on the board, that it could not make two eyes. For the first time I felt like I might actually be able to understand this Go thing! I think if I ever reach the point where I can look at the situation above and say with confidence that I understand why Shuko defended the center, I will have passed another great milestone in coming to grips with this game :-)

Dave: I have never forgotten this question - and the lack of a clear answer. Today (2006-05-13) I had the opportunity to ask a couple of pros about this position. Since the beginning of this year I have attended the "Jinpukai" (a study group for amateurs) at the Nihon Ki-in most Saturdays. It is fun in itself but even better is the usual practice of going out drinking with a bunch of the students and a couple of the pros afterwards. Planning ahead, I had brought my copy of the book with me. After a couple of hours of sushi and booze, I sprung this question on Takahashi Hideo 7p, who is one of Ishida Yoshio's students. Takahashi-sensei was born in 1971, the year this game took place, so he wasn't absolutely current with the analysis :-) After deep thought (or what passes for deep thought with a table full of empty sake bottles and beer glasses), his answer was that... most likely White just made a mistake and missed a good opportunity here! An hour or so later (different venue but still drinking) I was able to put the same question to Sakai Maki 8p. His answer was the same! Undoubtedly pros have a somewhat different view of each other than we amateurs have of them as a group. But I could not help but laugh at the ease with which they went straight to the most likely explanation - didn't see it, missed the chance :-).